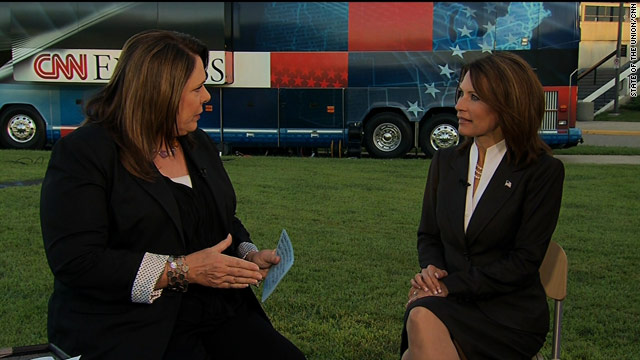 Bachmann: I don’t compromise my principles

(CNN) – Fresh off a win at the Iowa straw poll, Minnesota Rep. Michele Bachmann stood by her principles Sunday, saying in an interview with CNN’s “State of the Union” that she won’t compromise her values on “big issues.”

Facing criticism that tea party members resisted compromise to reach an agreement on the debt ceiling, the Republican presidential candidate was asked to identify legislation that represented a compromise between herself and lawmakers of an opposing or alternate view. “I stand on a core set of principles but you want to continue to move in a positive direction,” Bachmann told Chief Political Correspondent Candy Crowley. “I’ve done that throughout my legislative career.”

“On big issues, I don’t compromise my core sets of principles.”

And in her experience, the public doesn’t favor a compromise between spending cuts and raising revenue through tax increases as a method of battling the deficit.

“I haven’t gone one place in Iowa or South Carolina or New Hampshire where anyone said, ‘Please raise my taxes,’” she argued. “Never happened.”

“People are not saying yes, raise the debt ceiling, we want you to borrow more money - it doesn’t happen…people are very upset and nervous about where the economy’s at right now.”

And for Bachmann, a win at the straw poll in Ames, a contest that measures candidate strength and organization in Iowa, also communicated a bigger message.

“People sent a message to President Obama. They said, ‘We are done with your policies, we want something very different.’”

Bachmann believes that the 2012 election will be an “economic selection,” in which she will fare well because “people want to know who can turn the country around.”

“People want job creation,” she stated. “They want the economy to turn around and [they want to] work. I have that background.”

And if she reaches the White House, Bachmann said she would revisit the policy that prevented gay service members from openly serving in the military known as “don’t ask, don’t tell.”

“The ‘don’t ask, don’t tell’ policy has worked very well,” she said. “I would be in consultation with our commanders but yes, I probably will [reinstate the policy].”

Though she hasn’t yet decided whether to end the gas tax when it expires in September, Bachmann did say that on the matter of gay marriage she thought it imperative that judges refrain from “legislating from the bench.”

“I think it’s more important that people have a right to weigh in on the laws that they choose to live under,” she asserted. “That was the problem here in Iowa.”