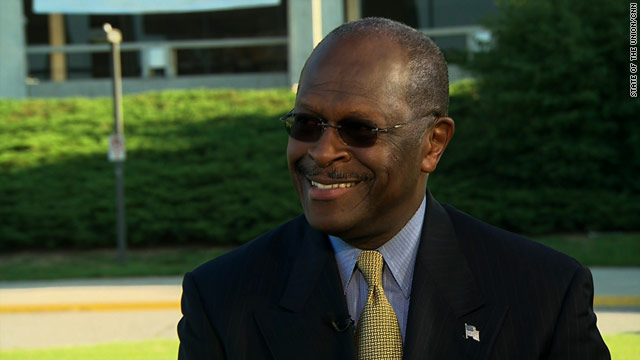 Cain: I wake up saying I can win

“Finishing in the middle, that is a great position to be in,” he said Sunday during an interview on CNN’s “State of the Union.”

Former Minnesota Gov. Tim Pawlenty may be dropping out of the presidential race after placing third in Ames, but that has no bearing on the Cain campaign.

“He made a big investment and he doubled down and didn’t pull it off,” Cain told CNN Chief Political Correspondent Candy Crowley.

Speculating on why Pawlenty decided to drop out of the race for the 2012 GOP nomination, Cain said, “He probably ended up with some debt and so he didn’t finish higher…it will be more difficult for him to raise money, so I believe that’s probably it.”

But the former CEO of Godfather’s Pizza doesn’t see himself in a similar situation, though he finished two places behind Pawlenty with 8.6 percent of the straw poll vote.

“I run a campaign like a business,” Cain asserted.

“We don’t allow the spending to get out ahead of the revenue … and we’re still able to be very effective.”

“We’re not making huge gambles on spending before we get the money,” he continued.

“Because of the grassroots nature of my campaign and because of the way people are connecting with my message, [the campaign] continues to gradually build. It doesn’t have these ups and downs and these ebbs and flows - like some of these other campaigns - if you’re dependent on moving it with the media.

“No, we’re moving it with message,” he affirmed.

Cain said he views the straw poll as more of a “barometer” than an indicator of his chances to secure the GOP nomination for president. And he finds comfort in statewide poll results that place him third in Iowa.