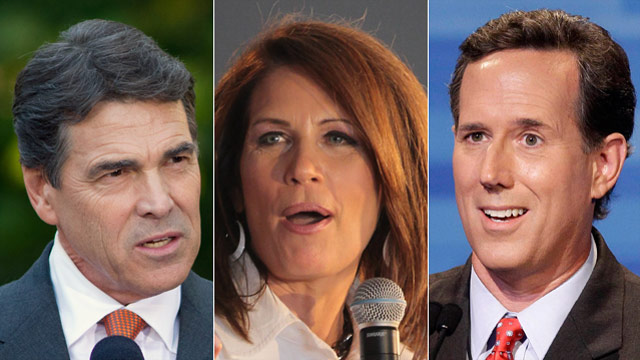 (CNN) – Three GOP presidential candidates will appear Sunday evening at an event in Iowa dubbed a “showdown at the OK corral” by Rep. Steve King.

Minnesota Rep. Michele Bachmann, still coasting from her win at the straw poll in Ames, will speak at the Republicans of Black Hawk County Lincoln Day Dinner.

It’s familiar territory for the three-term congresswoman who hosted a reception at the same venue in her hometown of Waterloo on the day before she announced her bid for the presidency.

Texas Gov. Rick Perry, a newly minted candidate, will arrive at the end of a three-state swing through the early primary and caucus states of South Carolina – where he announced his presidency Saturday – New Hampshire and Iowa. He is expected to give remarks at the dinner shortly before Bachmann.

Perry’s stumping won’t stop there. He will continue on a three-day tour of Iowa including an appearance Monday at the state fair soap box in Des Moines, a traditional pit stop for presidential candidates.

Perry did not compete at the straw poll but collected 718 write-in votes at the contest in Ames.

Rounding out the group is former Pennsylvania Sen. Rick Santorum who placed fourth at the straw poll. He is expected to appear before both Perry and Bachmann.