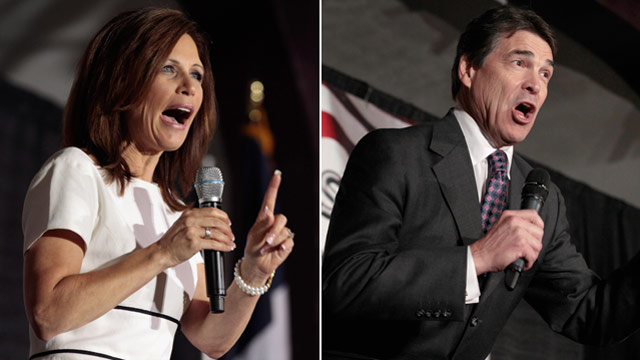 Perry and Bachmann duel for spotlight in Iowa

The event, a Lincoln Day Dinner benefiting the Black Hawk County GOP, came as the Republican campaign entered a new phase following the departure of former Minnesota Gov. Tim Pawlenty from the race.

All eyes at the dinner, held at the Electric Park Ballroom in Waterloo, were fiercely trained on the two candidates who plan to lay claim to Iowa in the coming months: Texas Gov. Rick Perry and Minnesota Rep. Michele Bachmann.

Perry was making his Hawkeye State debut one day after formally entering the race and aiming to live up to the hype surrounding his newfound candidacy.

After sidelining Pawlenty, once her chief rival in the state, Bachmann was out to prove that she can maintain her lead in the face of a fresh challenge from a deep-pocketed foe with a similar appeal to evangelical Christians and tea party activists.

It seemed clear that Perry would present a more difficult test than Pawlenty.

Donning a perfectly-cut suit and hard-to-miss Lone Star cufflinks, the imposing Texan paced the stage with a confident ease and moved quickly to establish a favorable storyline: That he is a full spectrum conservative with an unimpeachable record of job creation who can defeat President Barack Obama in 2012.

“We may have issues that separate us, but bringing those diverse groups together and making sure we have a candidate who can beat Obama in November is the most important thing we can do,” he told the audience, who paid rapt attention to the newly minted candidate. “And it's got to be someone that understands, that knows how, who has had job creation experience in their background.”

Former Sen. Rick Santorum, who led off the trio of candidates on the speaking schedule and has spent more time in Iowa than any candidate in the field, stood off to the side as Perry spoke, carefully evaluating his new rival.

Bachmann, meanwhile, arrived late to her speech but promptly went about hitting the notes that have propelled her to the top of the polls in Iowa.

She emphasized over and over again that she was born in Waterloo and spent there early years of her life here.

Perry took it all in, sitting smack in the middle of the audience in front of the stage, sipping water as she spoke.

After the speech, Bachmann spoke to reporters but dodged questions about how a three-term member of Congress can stack up against two Republicans with executive experience - Perry and former Massachusetts Gov. Mitt Romney, the national frontrunner - on the matter of creating jobs in a difficult economy.

“We welcome Gov. Perry to the race,” said Bachmann, who said she had “not yet” spoken to Perry about his entrance into the race.

It was clear what storyline Bachmann preferred to discuss. She repeatedly hoisted up for the cameras the front page of the Waterloo Courier, which reported on her straw poll win.

While Bachmann was late to the event and rarely left her cocoon of advisers and bodyguards, Perry arrived a full hour before the program and jumped right into campaign mode, moving from table to table introducing himself to audience members one-by-one and, in a few cases, offering hugs and planting kisses on the cheeks of some women. He was mobbed by reporters and cameras as he tried to navigate the crowd.

He sat down at a table with a local couple, Jim and Cecelia Mudd, who expressed their frustration with the president’s handling of the economy. Perry agreed.

“We have just gone through a three-year experiment with the American economy that has gone tragically bad,” he said. “There are a lot of independents and even some Democrats who are going to take a look at the options here. There was interesting clarion call of hope and change that people went for, and it has been a disaster economically, and frankly foreign policy-wise too.”

As he moved through the room, he declined to answer most of the questions tossed at him from a brigade of political reporters eager for their first glimpse of candidate Perry.

He did stop to tell one reporter about his natural appeal to Iowa voters, thanks to his understanding of rural values. Perry was raised in the small farming town of Paint Creek, Texas.

“Across the 50 states, each state is going to be different, but from the standpoint of campaigning here in Iowa, I would put it probably not too unlike campaigning for Agriculture Commissioner in Texas back in 1990,” he said. “Going to a lot of small towns, going to a lot of picnics, going to a lot of fairs. We will spend a lot of time in Iowa. These people are a lot like the folks I grew up with. Most of them are agriculturally-oriented, small town folks. We are going to have a good time getting to know them better.”

“We look forward to doing battle with him,” Rollins told CNN. “I think the critical thing is, as he gets into the debates, we’ll see what he’s like. He has a good stump speech. He’s got all the right lines.”

Perry plans to spend three days traveling through five cities across the state meeting the Republicans who will participate in the caucuses early next year. He announced his campaign in South Carolina, which holds the first southern primary in the nomination fight, and he visited the leadoff primary state of New Hampshire on Saturday.

Ray Sullivan, one of Perry’s senior-most advisers, said the governor planned to introduce himself to Iowans before “drawing contrasts” with other Republicans who have been in the race for much longer.

"We don’t plan on quickly engaging the Republicans in the race,” he said. “We have to have the voters of Iowa and New Hampshire and South Carolina get to know him.”

But Sullivan cautioned that if attacked by Romney or Bachmann or Santorum, “we will certainly vigorously and aggressively defend the governor’s record and vision.”