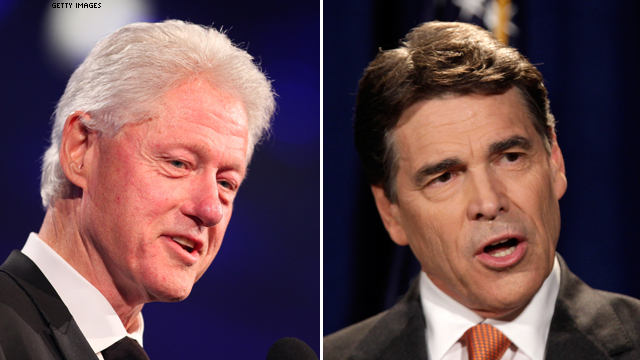 Clinton's comments, recorded in a video by the New York Observer, came in a speech to the International Association of Fire Fighters in Manhattan.

The former president had some choice words for Perry's platform on the need for smaller government.

"[Perry] said 'You know, I'm going to Washington to make sure that the federal government stays as far away from you as possible-while I ride on Air Force One and that Marine One helicopter and go to Camp David and travel around the world and have a good time'," Clinton said. "I mean, this is crazy."

Perry and other Republican presidential candidates have repeatedly said the federal government needs to have a more limited role in Americans' lives.

And while Clinton said every person-"even public employees"-can think of a tax that's too high or a regulation that doesn't make sense, he implied that the U.S. government is not the source of all problems.

"There is not a single solitary successful nation on earth today that does not have both an effective government and a good economy," Clinton said. "And in the world we live in, you can't have them unless you have both."