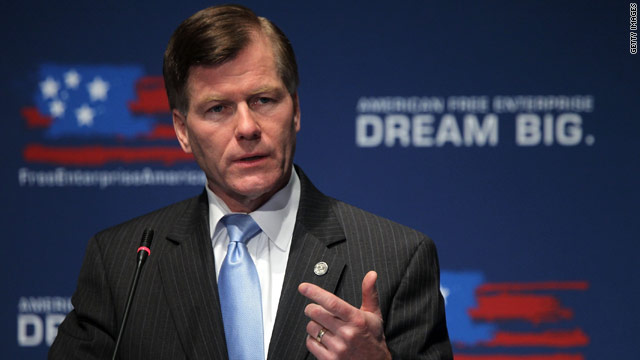 McDonnell had been serving as vice chairman of the organization.

"It is a tremendous honor to lead the RGA," McDonnell said in a statement put out by the group. "Thanks to the strong leadership of Governor Perry and the nation's twenty-nine Republican governors, the RGA is in position to have an unprecedented impact this election cycle."

Fourteen governorships are up for grabs in elections this and next year.

The new position will put McDonnell, who is already grabbing attention as a possible 2012 GOP running mate, further in the political spotlight. McDonnell was a hero for the party in 2009, when the then-Virginia attorney general trounced his Democratic opponent to win the state's governor's office away from the Democrats. McDonnell's poll numbers continue to stay in positive territory, and of course Virginia is a crucial battleground state in 2012.

President Barack Obama won the state in 2008, the first Democrat to capture Virginia in a presidential election since 1964.

McDonnell has said in interviews that he would be interested in being the vice presidential nominee, and he's not closing any doors to possibly running for the White House in 2016 if Obama wins re-election next year. Next month McDonnell travels to the first-in-the-nation primary state of New Hampshire to keynote a state key GOP fundraiser.

"What Bill Clinton was to Democrats, Bob McDonnell is to Republicans: A new generation that can appeal to voters across the political spectrum. He's pure conservative principles with an optimistic candy coating. He will be at the top of the 2012 GOP nominee's short list for VP," says Alex Castellanos, a Republican strategist and CNN contributor.

Castellanos was a top media adviser to the 2004 Bush-Cheney re-election campaign and to Romney's 2008 bid for the GOP presidential nomination.

"In 2009, Bob McDonnell ran a stellar campaign that showed Republicans a path forward for being the inclusive party we strive to be. His victory was an early sign that Republicans would have great success in the 2010 elections and his success should be of no surprise to anyone who has watched Bob McDonnell over the years," says Doug Heye, a GOP strategist and former Republican National Committee communications director.