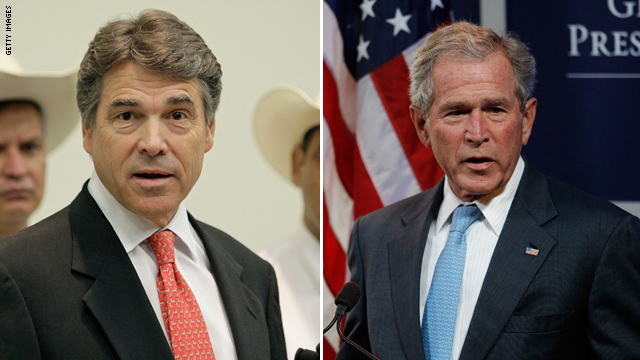 "I am Rick Perry and he is George Bush," Perry declared as he marched through the Iowa State Fair, surrounded by reporters. "And our records are quite different."

Asked what the biggest difference is, Perry responded: "I went to Texas A&M. He went to Yale."

He did not answer when pressed to name a policy difference.

Perry, who took office in Austin after Bush captured the White House in 2000, seemed to bristle at the suggestion, which is certain to haunt him during his campaign.

Some Republicans are queasy about the prospect of the party putting another swaggering Texan at the top of the ticket in 2012, especially with recent polls showing that Bush still shoulders most of the blame for the sagging economy.

"George Bush is not my opponent," he told reporters. "He a former president and we give him all the respect for that, but we are talking about how you create jobs."

Perry is in the midst of his first trip to Iowa as a presidential hopeful, and on Monday he showed off the retails skills that made him such a formidable candidate back home in Texas.

Back-slapping and cheek-pinching his way through the fair, Perry displayed a common touch, posing for photos with toddlers and talking ranching with passers-by.

When offered to taste a sizeable pork tenderloin, he ate the whole thing.

"Pork, the other white meat," he said, before tearing into the slab of meat. "We won't have to worry about dinner tonight, and there will be a good little bit of exercise, too."

He made a point of shaking hands with military veterans and their families and rarely missed a chance to remind voters that he served as a captain in the Air Force.

Perry said that if elected, members of the United States Armed Forces would respect him more than President Barack Obama or any of his Republican rivals who have not served in the military.

"I think they would really like to see a person who wore a uniform in that office and I think that's just a true statement," he said. "I wouldn't back up off it an inch. Go ask your veterans if they would rather see somebody who has never served as Commander-in-Chief."

He added, "Experience matters, having walked in a person's shoes, having done what these young men and women in the military are doing matters to them. I don't want somebody sitting in the front left seat of that airliner who just got their pilot's license."