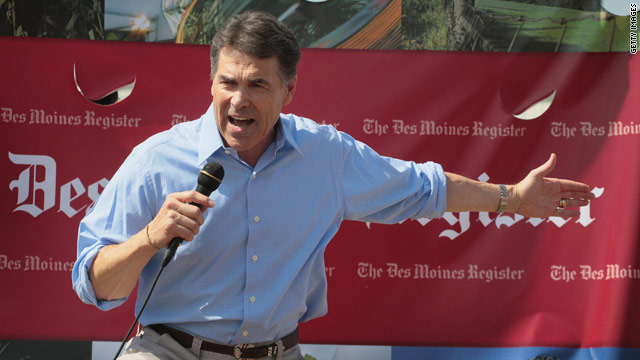 Perry kisses off Romney criticism: 'Give him my love'

Des Moines, Iowa (CNN) – Texas governor Rick Perry blew a kiss to Mitt Romney on Monday, kissing off criticism from the former Massachusetts governor and saying, "Give him my love."

The newly-minted Republican presidential candidate was responding to criticism from Romney during a visit to the Iowa State Fair in Des Moines. In New Hampshire earlier Monday, Romney said he is the only contender in the GOP presidential race with extensive experience in both business and government.

CNN asked Perry about the criticism.

Pressing his hands to his lips - then blowing a kiss – Perry's message to Romney: "Give him my love."

CNN pressed Perry on the substance of Romney's dig.

"I think it's oranges and apples," Perry said. "Running a state is different from running a business. What I would say is go take a look at his [Romney's] record when he was governor and my record when I'm governor. Then you got some apples to apples."

Romney isn't the only GOP competitor Perry addressed from the booth of the Iowa Republican Party. CNN also asked the Texas governor about criticism from fellow GOP candidate Michele Bachmann's campaign, which has criticized Perry for not participating in last week's GOP presidential debate or the Ames straw poll on Saturday.

Perry's response to that was essentially a verbal kiss off.

Perry visited the Iowa GOP booth after speaking at the "soapbox" at the state fair – a few bales of hay where presidential contenders have addressed supporters, the press and critics since last week. The governor laced his speech with a mix of policy prowess, job-creation bombast and southern folksiness.

"I know what this country needs. And we need to get Americans back working," Perry thundered. "We need to be able to create an environment in this country where anybody that wants to work can find that job. And I'm really proud of what we've done in the state of Texas in the last decade."

"He's coming into Iowa here in a little bit. And I'm asking him to do something," Perry said. "He says he's on a listening tour. So I'm gonna talk to him. And here's what I wanna say to him. 'Mister President, you need to free up the employers of this country to create jobs.'"

While Perry is making job creation in Texas the centerpiece of his presidential campaign, there is more to the story.

CNN Money reports that "Texas leads the nation in minimum-wage jobs, and many positions don't offer health benefits. Also, steep budget cuts are expected to result in the loss of more than 100,000 jobs."

The site also reports that "Texas enjoys advantages that have nothing to do with having Perry at the helm."

Meanwhile, Perry showed off some of his southern charm that's attracted supporters and could woo others.

The governor talked about his love for the Second Amendment's right to bear arms.

"You know what. That's kind of one of my favorite amendments," Perry said.

"The Second Amendment allows me to go jogging with my daughter's dog over here. And if a coyote jumps out, I can take care of it."