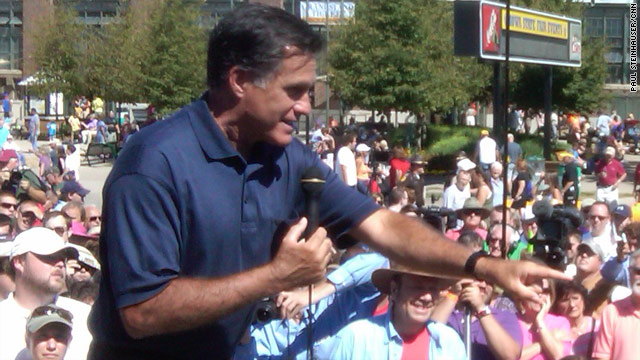 Romney touts business experience; says most of his rivals don't have it

Litchfield, New Hampshire (CNN) - Mitt Romney said Monday his experience in business would help propel him over his opponents for the GOP presidential nomination, including the man who threatens to be his biggest rival, Texas Gov. Rick Perry.

Facing reporters' questions, the former Massachusetts governor and private businessman took a dig at Perry, who drove media coverage this weekend with his splashy entrance into the presidential race, and most of the rest of the field of Republican White House hopefuls.

"I think understanding how the economy works by having worked in the real economy is finally essential in the White House and I hope people recognize that," said Romney.

"I respect the other people in this race but I think the only other person that has that kind of extensive private sector experience besides me in the Republican race is Herman Cain, and I respect Herman Cain but I also think it's helpful to have that government experience that I've had," Romney said.

Romney has repeatedly faulted President Barack Obama for failing to understand how private business works, and he pivoted to apply that criticism to the Texas governor. Perry has essentially been a career politician, serving 11 years in the Governor's mansion and as Lt. Governor to then-Gov. George W. Bush before that.

"I've learned how the economy works and I believe that skill is what the nation is looking for," Romney said, continuing his strategy of highlighting his business credentials in a race that will hinge on the economic slump.

Perry narrowly beat Romney as a write-in candidate at the Ames Straw Poll in Iowa this weekend - a competition both candidates bypassed - prompting questions about the stability of Romney's frontrunner status.

Perry, a tea party darling who is pursuing both social and fiscal conservatives in his bid for the White House, touted his jobs record in Texas at events over the weekend.