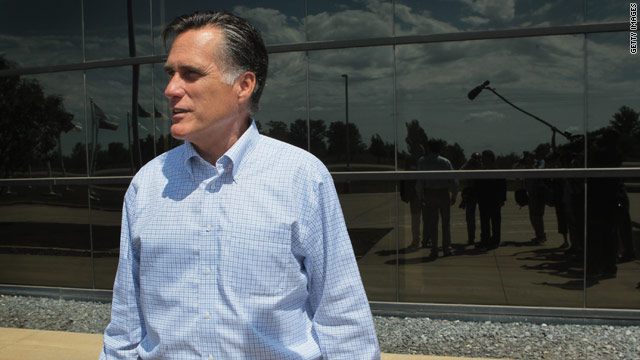 Romney refuses to engage on Perry, focuses on Obama

Merrimack, New Hampshire (CNN) - Mitt Romney sidestepped questions Tuesday about his newest opponent, Rick Perry, in a refusal to escalate an intra-party squabble the day after the Texas governor questioned his credentials.

The Massachusetts governor faced repeated questions from the media about Perry, who at an Iowa event Monday told reporters to compare the records of the two governors. Perry frequently touts his record on job creation in Texas.
END_OF_DOCUMENT_TOKEN_TO_BE_REPLACED

Promoting her new book, Troublemaker, on several talk shows, the tea party poster-candidate admitted that the infamous spot which attempted to distance her from past comments that she'd "dabbled into witchcraft" wasn't the best choice.
END_OF_DOCUMENT_TOKEN_TO_BE_REPLACED 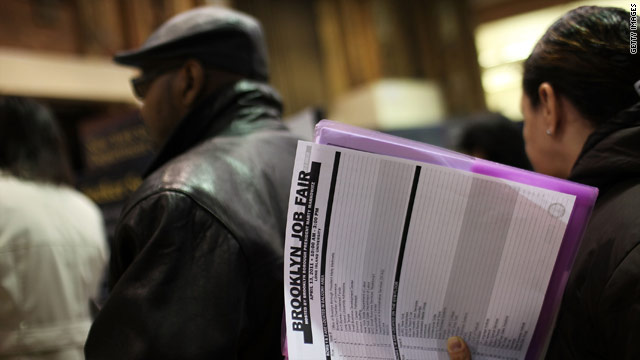 Should Obama extend the payroll tax holiday and jobless benefits?

NEW YORK (CNNMoney) - Now that the debt ceiling crisis is behind him, President Obama is ready to focus on the top problem plaguing the American economy: weak job creation.

Part of his prescription for 2012 revolves around cutting payroll taxes by 2 percentage points and extending unemployment benefits. The idea is give people more money to spend, which will entice businesses to hire additional workers to meet the demand.

Wait...aren't those programs already in place? 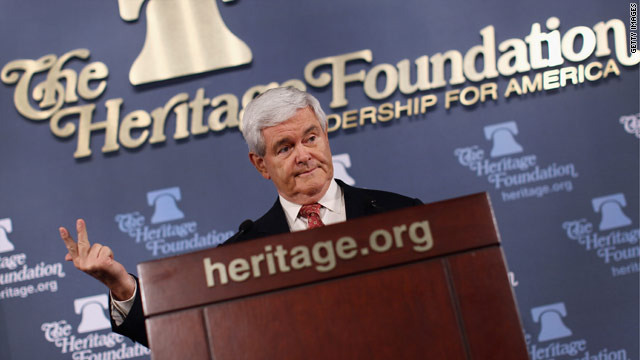 Washington (CNN) - Former House Speaker Newt Gingrich wants the congressional "super committee," charged with cutting more than a trillion in spending by the end of the year, to get cut itself.

"Why is it super other than that they've aggregated power into 12 people who will spend the next few months fighting?" said the Republican presidential candidate in a speech Tuesday at the Heritage Foundation.
END_OF_DOCUMENT_TOKEN_TO_BE_REPLACED 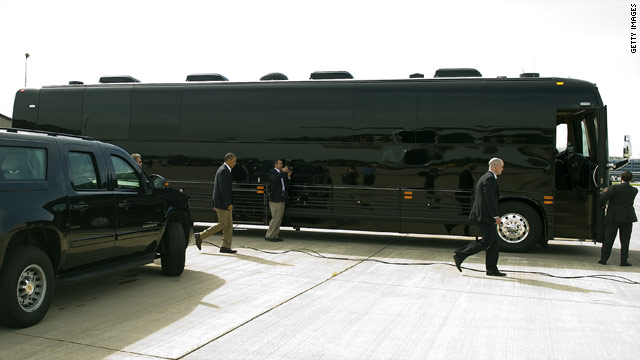 (CNN) - President Barack Obama is rolling through the Midwest this week on a three-state, campaign-style swing in a brand new, sleek, black, armored bus. It's pretty flashy – no, seriously, it is, as in it has flashing lights like a police vehicle, which were on as the president rolled into his stop in Cannon Falls, Minn. on Monday.

The bus is one of two the Secret Service bought recently (one in April, one in June) to move "protectees" – President Obama, Vice President Biden, the First Lady and, soon, the Republican presidential nominee, as well as others. 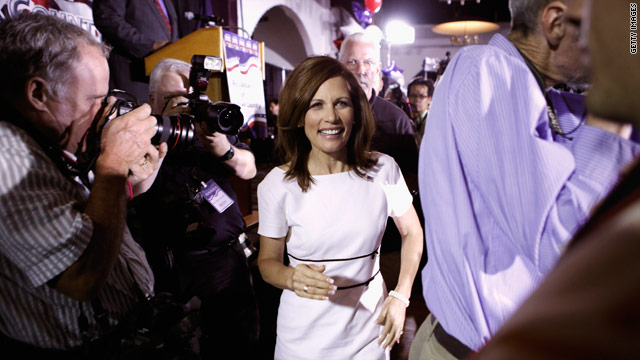 Bachmann assets worth up to $2.8 million, carries sizable loans

(CNN) – Minnesota Rep. Michele Bachmann and her husband own assets worth up to $2.8 million but also owe up to $750,000 in outstanding loans, according to a federal financial disclosure report filed Friday.

The Republican presidential hopeful reported owning assets totaling between $1.3 million and $2.8 million, including her husband's psychotherapy practice and office space worth between $600,000 and $1.3 million and a family farm valued between $500,000 and $1 million. The clinic drew $50,000 to $100,000 in gross income in 2010, while the Independence, Wisconsin, farm generated income between $5,000 and $15,000.
END_OF_DOCUMENT_TOKEN_TO_BE_REPLACED 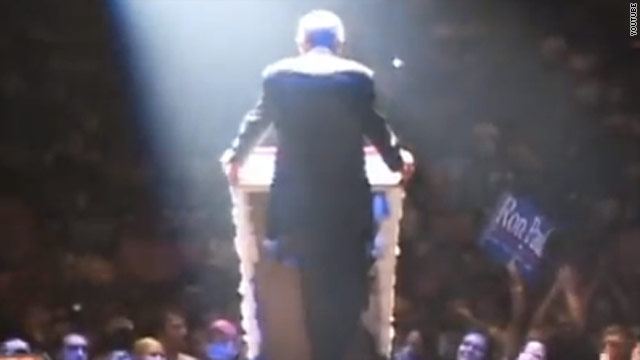 (CNN) - Just three days after nearly winning a crucial Republican presidential straw poll in Ames, Iowa, Texas Rep. Ron Paul is going up with a television commercial in Iowa and New Hampshire that targets three of his rivals for the GOP nomination. 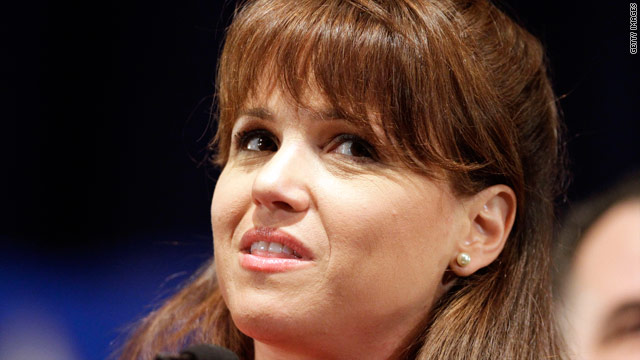 Promoting her new book, Troublemaker, on "Good Morning America" Tuesday, the tea party poster-candidate admitted that the infamous spot which attempted to distance her from past comments that she'd "dabbled into witchcraft" wasn't the best choice.
END_OF_DOCUMENT_TOKEN_TO_BE_REPLACED 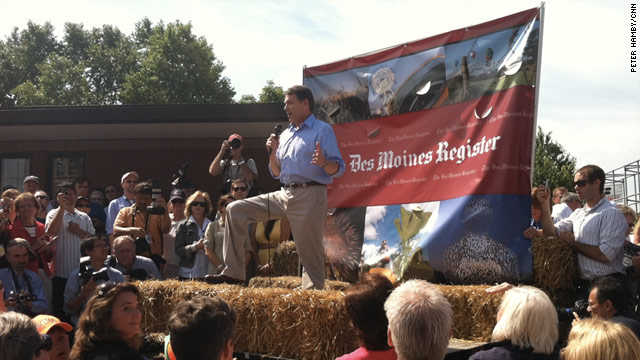 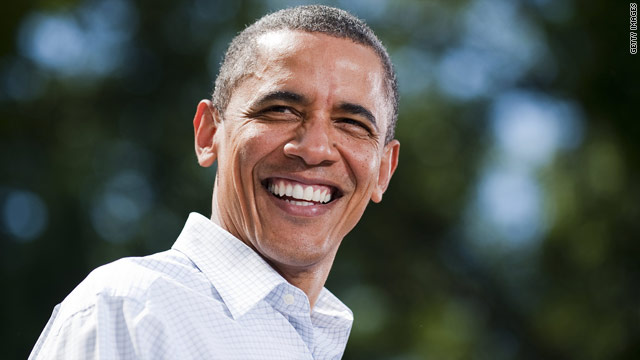 Obama checks in to Foursquare

The commander-in-chief has joined the location-based service and will be using it to highlight places he visits and what he does there, the White House announced on its blog Monday evening.