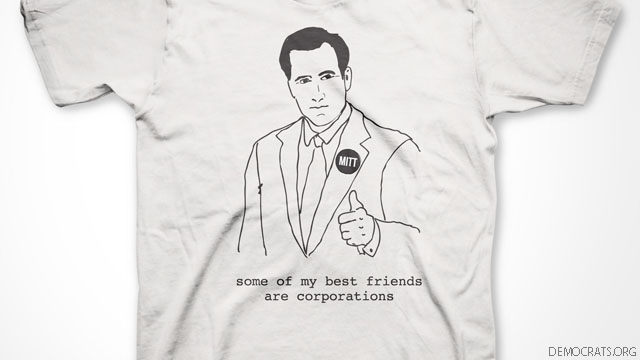 (CNN) - Democrats are continuing to fundraise off a comment made last week by Republican presidential candidate Mitt Romney, this time with t-shirts mocking the former Massachusetts governor.

The $30 shirts from the Democratic National Committee show Romney with a thumbs up above the words "some of my best friends are corporations."

When pressed about raising the corporate tax rates during an appearance in Iowa Thursday, Romney told a heckler "Corporations are people, my friend."

Those on the left, including DNC chair Rep. Debbie Wasserman Schultz immediately seized upon the comments as an example of Republican's "misplaced priorities."

"It is a shocking admission from a candidate – and a party – that shamelessly puts forward policies to help large corporations and the wealthiest Americans at the expense of the middle class, seniors, and students," Wasserman Schultz said in a statement.

The DNC released an ad in Iowa Saturday pouncing on the same comments.

But Romney stood by the comments, saying a corporate tax is also a tax on individuals.

"People deserve the interest of our government, and any time you tax a corporation or a business, you're taxing people at one place or another," Romney said in New Hampshire Friday. "So we can't pretend that somehow, there's an entity out there made of steel and concrete and it's going to pay money to the government."