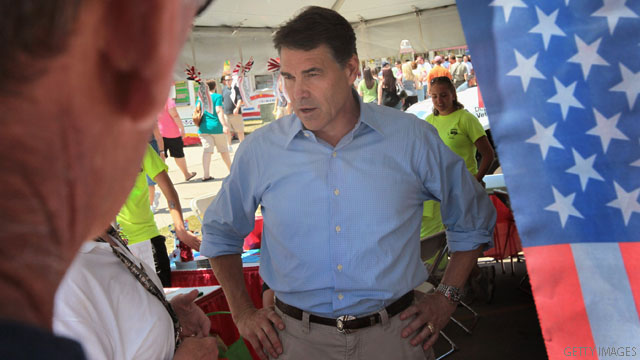 Perry hits back at Obama over jobs

Perry was responding to Obama's comment Tuesday that the Texas governor has "got to be careful" now that he's on a big stage.

"I think that everybody who runs for president probably takes a little bit of time before they start realizing that this isn't like running for governor, or running for senator, or running for Congress," Obama told CNN's Wolf Blitzer in Iowa. "You've got to be more careful with what you say."

Speaking at a salon of New Hampshire politicos at the Politics and Eggs breakfast in Bedford, Perry acknowledged the president's snub.

Perry also brushed aside critics who charge his oft-touted record of job creation in Texas is largely due to luck.

"There have been some over on the left that said the fact is that those 40 percent of the jobs created in America ... since June of 2009 was just luck," Perry said. "Mr. President, America's crisis is not bad luck, it's bad policies from Washington, D.C."