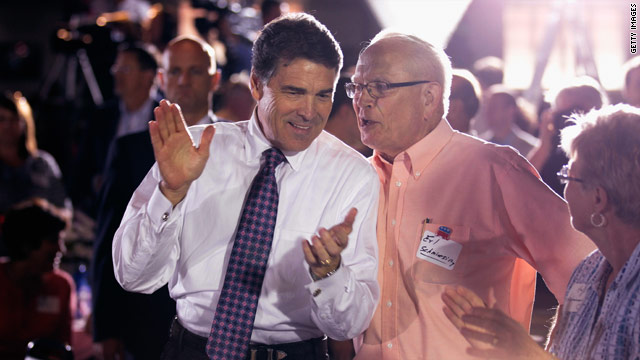 Perry to return for votes and money in South Carolina

Columbia, South Carolina - Texas Gov. Rick Perry will be talking to South Carolina voters and asking some to reach into their pockets when he makes his two-day swing through the state this week.

In addition to headlining a fund-raiser for the South Carolina Republican Party in downtown Columbia Friday, the GOP presidential candidate will attend a fund-raiser at a private residence just outside Greenville that same evening.

According to a copy of the fund-raising invitation obtained by CNN, a reception with Perry will be held at the home of The Capital Corporation President and CEO Dan Adams. "Sponsors" will pay $5,000 per couple, and "hosts" will chip in $2,500 per couple or $1,000 per individual.

Perry's visit to the Palmetto state will overlap on Friday with GOP presidential contender Michele Bachmann, who will be wrapping up her own bus tour in the coastal Lowcountry of Myrtle Beach and Mt. Pleasant.

The state is expected to play a central role in both Perry and Bachmann's nomination fight.

Perry, who declared a run for the White House less than a week ago in Charleston, will spend more time visiting the Upstate, home of social conservatives who are critical for a win in the first Southern primary.

But the bus will first stop at a major urban hub in the state's Pee Dee region. The candidate will visit Bazen's Family Restaurant in Florence Friday morning and then tour a medical facility there.

Early Friday evening before the fund-raiser, Perry will visit local businesses in downtown Greenville with Mayor Knox White. The following morning, he will stop by Tommy's Hen House for a breakfast visit.

Perry's final stop will be in Rock Hill, where he'll visit at Old Town Bistro around lunchtime.

A Facebook page set up for the Florence restaurant visit already has 80 people who said they will attend.