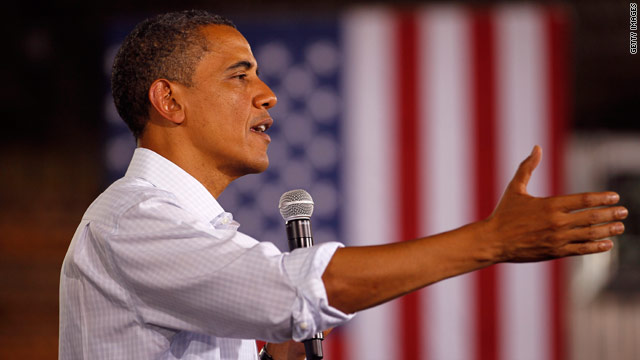 Poll: New low for Obama in state he won big in '08

(CNN) - Call it a sign of the times for President Barack Obama.

Only 44 percent of New Jersey voters approve of the job the president's doing in the White House, according to a new Quinnipiac University poll of Garden State voters. That's the lowest score for Obama in Quinnipiac polling in a state that he won by 15 percentage points over Sen. John McCain in the 2008 presidential election.

The survey indicates that 52 percent disapprove of how the president's handling his duties. That's a six percent increase since June when 46 percent disapproved of the job Obama was doing in office while 50 percent of those questioned approved.

According to the poll, Republicans overwhelmingly give the president a thumbs down, as do independent voters by a 57-39 percent margin. Seventy-seven percent of Democrats say they approve of the job Obama's doing in the White House.

The Quinnipiac poll comes as the president's approval rating among all Americans has slipped below 40 percent twice in the past four days in the Gallup Daily Tracking poll.

"Keep in mind that a 52 percent disapproval rating doesn't mean that 52 percent of New Jersey voters would choose the GOP candidate over President Obama if the election were held today. National polls show that nearly three in ten people who disapprove of Obama feel that way because he has not been liberal enough," says CNN Polling Director Keating Holland. "Those disaffected liberals won't go Republican in 2012 - but they might just stay at home. That's the hidden peril for Obama of a high disapproval rating in a state like New Jersey."

The Quinnipiac University poll was conducted August 9-15, with 1,624 registered voters in New Jersey questioned by telephone. The survey's overall sampling error is plus or minus 2.4 percentage points.