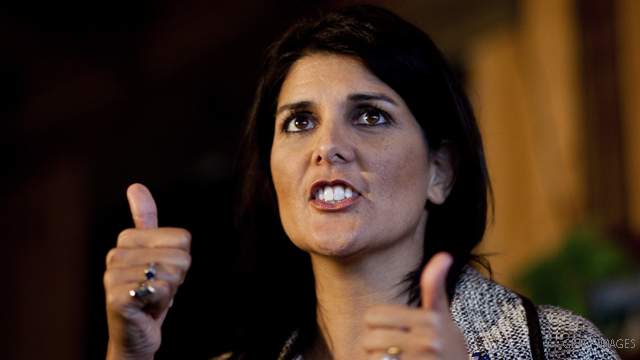 Columbia, South Carolina (CNN) – South Carolina Gov. Nikki Haley said she is not ready to endorse a Republican presidential candidate, but that doesn't mean she's not willing to meet with them and talk to them on the phone occasionally.

Herman Cain, who is holding a campaign event in nearby Lexington later Thursday, tweeted a photo from his meeting with South Carolina's governor .

"I just got out of a meeting with SC Gov @NikkiHaley. She said it was very productive, and I happen to agree!" was the tweet from Cain's handle @THEHermanCain.

The 140-characters-or-less Twitter limit did not leave room for the Godfather's Pizza CEO to elaborate, but he's not the only presidential candidate to mention any interaction with the governor of a critical early primary state.

Minnesota Rep. Michele Bachmann, a darling of the tea party movement like the governor, met with Haley and her family during a campaign visit to the state in July.

On Tuesday, Bachmann told members of the press in Spartanburg, and later voters at a town hall in Greenville, that she "barely got off the plane and my phone rang. It was your wonderful Governor Nikki Haley calling me."

Texas Gov. Rick Perry met with Haley last weekend at the RedState Gathering in Charleston before he announced his run for the White House.

Even though the South Carolina governor said she is remaining neutral until she meets the candidates and they campaign throughout her state, that didn't keep her from calling Perry a "superstar" in her remarks at the conservative gathering following their meeting.