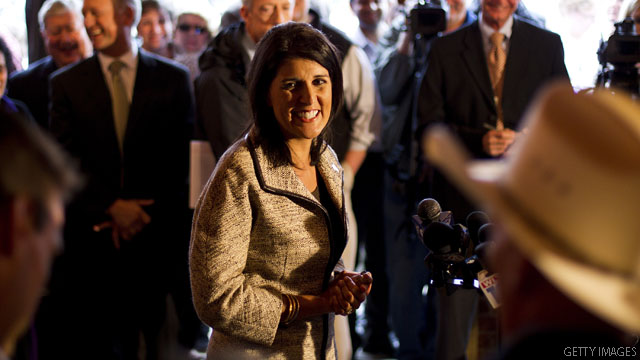 Haley says no to V.P.

(CNN) - South Carolina Gov. Nikki Haley dismissed any suggestion she would serve as the Republican vice presidential nominee in the 2012 election.

In an interview Thursday with CNN's Wolf Blitzer, the first term governor said if asked to serve in the No. 2 spot, she would not accept.

Haley, who was elected in 2010 with support of the tea party movement and former Alaska Gov. Sarah Palin, said she is focused on her job as governor but is hopeful about the current GOP presidential field.

"We are now seeing that this country is in pretty bad shape and what I do see is we've got great candidates that are going to lift us out of this and I think we'll have great candidates for vice president as well," Haley said. "But I'm not going to be one of them."

As governor of the first-in-the-South primary state, Haley has entertained the White House hopefuls, all hoping for her support. But she said it is too soon in the process to issue an endorsement.

"This is the time we really need to be doing a lot of listening to what their details are, what their specifics are and waiting to weigh in until we can really see what the full platform looks like," Haley said.