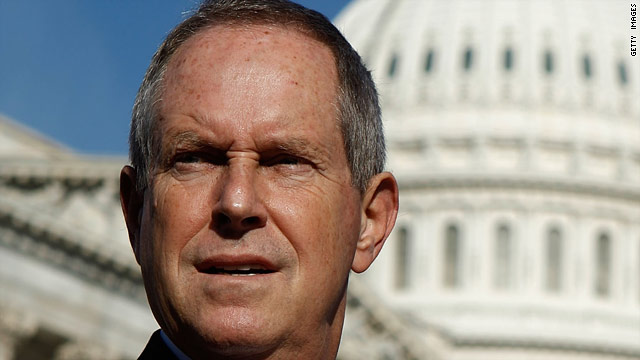 Columbia, South Carolina (CNN) - It was probably a bite from a tick that kept Republican Rep. Joe Wilson from attending a rally for presidential candidate Michele Bachmann on Thursday.

"I just put a call into Joe this morning. We were hoping he was going to be here," Bachmann said as she introduced one of Wilson's staffers at a rally in downtown Columbia.

Wilson's State Director Butch Wallace told the small crowd his boss is sorry he could not attend, but said the congressman came down with a case of Rocky Mountain Spotted Fever, a bacteria spread to humans through tick bites.

"Congressman Wilson recently contracted an illness while working in his yard. Currently, he is taking antibiotics to treat symptoms of Lyme Disease. His condition is not contagious," Neal Patel said, adding that he is looking forward to a speedy recovery.

Wilson was an early endorser of presidential candidate Tim Pawlenty, who recently bowed out of the race after a poor standing in the Iowa Ames Straw Poll.

If it wasn't for the tick, this would have been Wilson's first appearance with another presidential candidate since Pawlenty dropped out last weekend.

Was Wilson going to throw his support behind the Minnesota congresswoman?

Not the case, according to Patel.

"Congressman Wilson is not endorsing anyone right now. He is visiting events of many Republican presidential candidates," Patel told CNN.

That is unless he gets another tick bite.