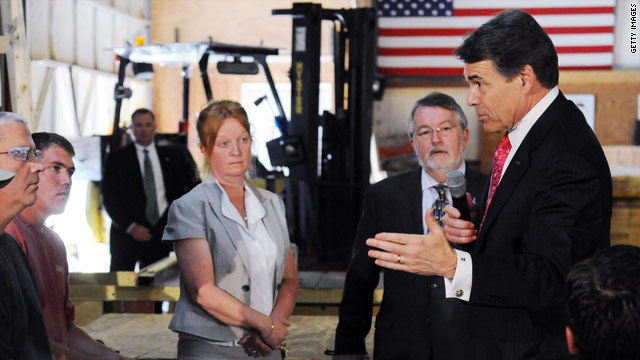 Columbia, South Carolina (CNN) – GOP presidential candidate Rick Perry may not think Washington should help create jobs but when it comes to illegal immigration, he doesn't think the federal government is doing enough.

That's what Margaret Gunderson of Abbeville found out when she asked the governor of the state that shares the largest border with Mexico where he stands on the issue.

"Matter of fact: $400 million we spent on border security in Texas since '07, and that's a shame because that's a federal responsibility," Perry said. "That's actually something the federal government's supposed to do."

His conversation with Gunderson came after speaking to a packed room of party loyalists, who paid to see the presidential newcomer and raise money for the state’s Republican party.

In those remarks, Perry appealed to the party base by delivering a message of smaller government.

"The central issue of this election is gonna be an administration that believes Washington must be our caretaker," he said. "And the people who want Washington to only care for their constitutional responsibility."

Perry shook up the Republican field by entering the nomination fight six days ago, announcing his run at the conservative RedState Gathering in Charleston.

He is in the middle of a two-day, four-city South Carolina bus tour, making stops in Florence, Columbia, Greenville, and Rock Hill.

The White House contender did not take questions from the press on the first day of his visit to the early Southern primary state.

As he was working the room at the fundraiser, Perry was asked by a journalist if he would be taking questions and politely replied, "No, I'm just shaking hands. I pretty much left the message here," referring to the seven-minute speech he just delivered.

Earlier in the day Perry spoke at length on health care at the Carolinas Hospital System in the Pee Dee region.  He told gathered health care professionals that if he is elected president, on his first day in office, “There will be an executive order on that desk that eliminates as much of Obamacare as I can have done with an executive order.”

The longest-serving Texas governor spent a lot of time retail politicking in the morning at Bazen’s Family Restaurant in Florence, at the lunchtime Columbia fund-raiser, and on an evening walk through downtown Greenville with the mayor.

In Greenville Perry hammed it up with people of all ages, even rubbing tummies of four-legged friends who can’t vote.

An employee at The Barkery Bistro handed the dog lover a bag of treats called “Puppy Crack” to bring home to his dogs in Texas.