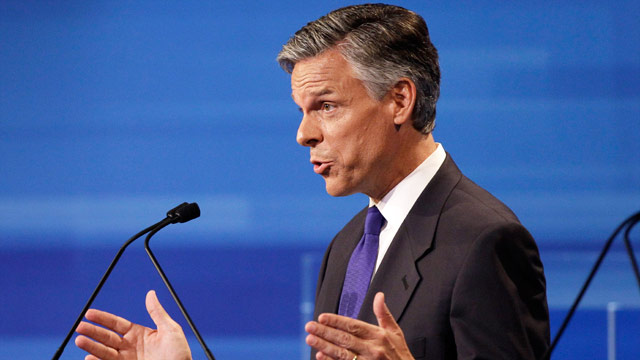 Former Utah governor and U.S. Ambassador to China Jon Huntsman, who is trailing top tier candidates in most national polls, openly criticized Perry's position on Twitter this week. He stressed the potential impact on the party in a taped interview that airs Sunday.

"The minute that the Republican Party becomes the party–the anti-science party–we have a huge problem. We lose a whole lot of people who would otherwise allow us to win the election in 2012," Huntsman said on ABC's "This Week."

Perry defended his position Saturday as he was wrapping up a two-day bus tour in South Carolina.

"I just happen to believe that the earth's temperature has been moving up and down for millenniums now, and there are enough scientists that happen to be skeptical about the reasons for it and I happen to be one of those that are skeptical," the Texas governor told reporters. "For us to spend billions of dollars on a theory that is not proven and that you have skeptical science against that is not in America's best interest."

In the interview, Huntsman said taking a position like Perry's "that basically runs counter to what 98 of 100 climate scientists have said, what the National Academy of Sciences has said about what is causing climate change and man's contribution to it, I think we find ourselves on the wrong side of science and, therefore, in a losing position."

GOP presidential candidate Mitt Romney waded into the debate in June, saying he believes global warming is occurring and humans are contributing to it.

The debate raises Huntsman's profile in a crowded presidential field and allows him to highlight what some might call his appeal to moderates and independents that Republicans need in order to win against President Barack Obama in the general election.

Huntsman was also quick to jump on reports that Perry told a New Hampshire woman that evolution is a theory that's "got some gaps in it."

"To be clear. I believe in evolution and trust scientists on global warming."