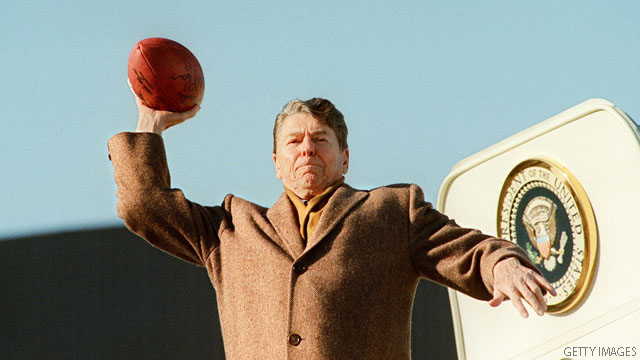 Games played during the weekend of September 23 through 26 will commence with the coin flip, followed by a loudspeaker announcement and Reagan football tribute video, according to the Reagan foundation. Reagan was born on February 6, 1911.

Football legends Lou Holtz, Doug Flutie and Lynn Swann will serve as co-chairs of the coin toss festivities as part of a year of celebration honoring the 40th president.

"If all my players had the heart and the drive on the field that the Gipper showed in the Oval Office, we would have won every game," said College Football Hall of Famer Holtz in a statement. "I want to encourage every football organization in the United States to stand together and honor the legacy of this great American, Ronald Reagan. We all could learn a thing or two from his example."

Reagan, who served two terms as president after two terms as governor of California, was an avid football fan, playing for his high school team in Illinois and serving as his college radio's football broadcaster. He later acted in pigskin movies, including "Knute Rockne: All American," during which he famously said "Win one for the Gipper!"

"The National Football Coin Toss celebrates the values that football teaches such as leadership, teamwork, and drive, which Ronald Reagan embraced and exemplified throughout his life," McLaurin said in a statement.

"For a twenty-one year old fresh out of college, broadcasting Big Ten games was like a dream," Reagan wrote in his autobiography "An American Life."