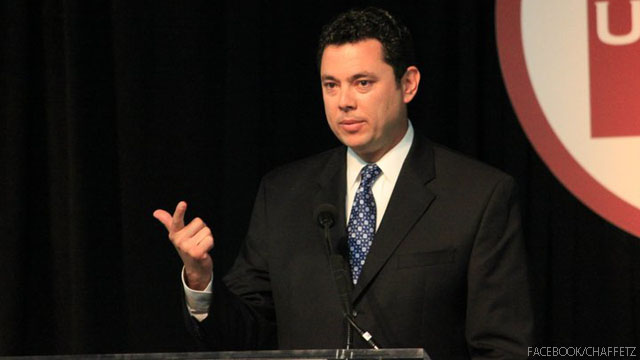 The two-term congressman who represents Utah's 3rd Congressional district enjoys strong support from many tea party activists and other grassroots conservatives. Hatch, who is running next year for a seventh term in the Senate, is facing opposition from some in the tea party movement, including FreedomWorks, a major DC-based conservative grassroots organization that is actively working to find a candidate to take on Hatch in next year's primary.

Hatch acknowledged the Chaffetz announcement in a press release from his campaign manager Dave Hansen.

"We wish Congressman Chaffetz the best in his congressional campaign and in his continued service as one of Utah's representatives. Senator Hatch looks forward to continuing to work together as a delegation to find solutions to the critical issues facing Utah and our nation," Hansen said.

Hatch, who wants to avoid Bennett's fate, has a history of reaching across the aisle to work with Democrats, a fact that obviously does not sit well with many tea party activists and other conservatives. But Hatch has taken steps since last year to buffer himself from criticism from those on the right by highlighting his conservative chops. He led the Senate GOP push for a balanced budget amendment and was a co-sponsor of a Republican amendment to repeal the new health care law. Earlier this year he landed a perfect score in the American Conservative Union's 2010 ratings.

Last Thursday, Hatch received support from an unlikely person, former Alaska Gov. Sarah Palin, a favorite of many in the tea party movement.

"To your particular point about Senator Orrin Hatch, he is doing good in terms of trying to get a balanced budget and he has been for the last couple of decades. He has pushed hard for some fiscal reforms that we have got to see implemented," Palin, the 2008 GOP vice presidential nominee, said on the Fox News Channel.

"We need to be agreeing and embracing his idea and working with him to make sure that that happens instead of shooing him away and shooing him out of a tea party movement," added Palin, who is considering a bid for the Republican presidential nomination.

Hatch quickly capitalized on Palin's comments, saying "I am grateful for the support of Sarah Palin as I continue to lead this fight. Mrs. Palin is highly respected by Utahns and the national conservative movement and I appreciate her influence to create a united front in confronting the issue of our national debt. It is an honor to have Sarah Palin's backing for the balanced budget amendment and I will continue to use my time in the Senate to see it passed."