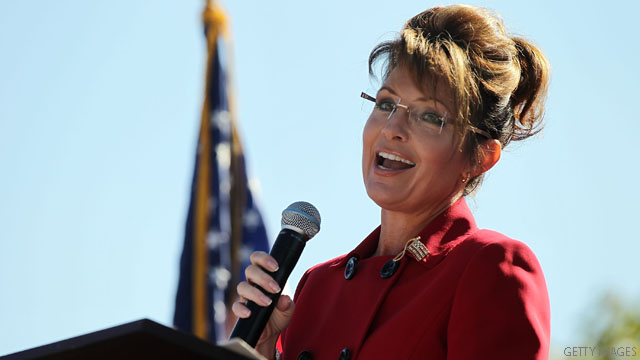 Will Palin be in by Labor Day? 'I doubt it'

(CNN) - Karl Rove caused a commotion in recent days by predicting that Sarah Palin will run for president and hinting that she could announce her campaign during a speech to a tea party group in Iowa over Labor Day weekend.

That might be news to Palin. Asked just over a week ago if she would be ready to join the race by the time Labor Day rolls around, Palin responded, "I doubt it."

Rove's evidence is this: A new, campaign-style video released by Palin's political action committee highlighting her recent visit to the Iowa State Fair, and in his words, "a schedule next week that looks like that of a candidate, not a celebrity."

Setting aside the fact that pretty much no one outside of Sarah and Todd Palin truly knows her schedule - and that Palin has no actual schedule in Iowa this week - lost in the Rove buzz is the reality that he and the former Alaska governor are not exactly close.

They have traded long distance barbs over Palin's decision to resign from the governorship in 2009, her participation in a television show about her life in Wasilla (Rove said the move undermined her political "gravitas"), and the viability of the Palin-endorsed Senate candidate Christine O'Donnell in 2010.

It is entirely possible that Rove might have gleaned some inside knowledge from the green rooms of Fox News, where he and Palin are both paid contributors. But it otherwise seems unlikely that outside of Palin's tiny circle of confidantes, Rove and Rove alone would have access to her political plans.

And yet, Palin remains among the most unpredictable political figures in the country. An announcement at the September 3 rally in Iowa remains unlikely, but it should not be ruled out either.

If she does decide to run at some point in the next month, she is promising to deliver a showstopper.

"You won't be able to miss the announcement," Palin winked at the pack of reporters following her around the fair in Des Moines earlier this month.

So will Palin become a full-fledged candidate when she returns to Iowa on September 3?

She was asked that very question by several reporters during her whirlwind walking tour of the Iowa State Fair on August 12.

Here she is, in her own words:

Q: When is a good time? Do you have a timeline?

Palin: I have said that that August/September timeframe is important for logistical and legal reasons to jump in there, but…

Q: So by next month?

Palin: I think that just practically speaking that has to be kind of a drop dead time. Also, in fairness to supporters, who are standing on the timeline, and this is what I have told Todd over and over again, I don't want to be seen as or perceived as stringing people along, asking supporters, 'Oh don't just jump in there on someone else's bandwagon because I may jump in, so hold off a little bit.' That is not fair to them. After another month or two goes by, they need to know who it is that they can jump behind. Now more than ever, everybody has got to get involved in this 2012 election. They need to get out there and campaign for their chosen candidates, its all the more reason to hurry up and decide.

A few moments later, there was this exchange:

Q: Will you know by the next time you are here in Iowa whether you will be in, over Labor Day?

Palin: I doubt it. By the next time I am here by September 3? I don't know if within the next couple of weeks I will be ready for an announcement or not.

Q: So the end of September is no longer a viable deadline?

Q: So the end of September would still be your timetable?

Palin: That is still a possibility for a timetable. Yes, definitely.