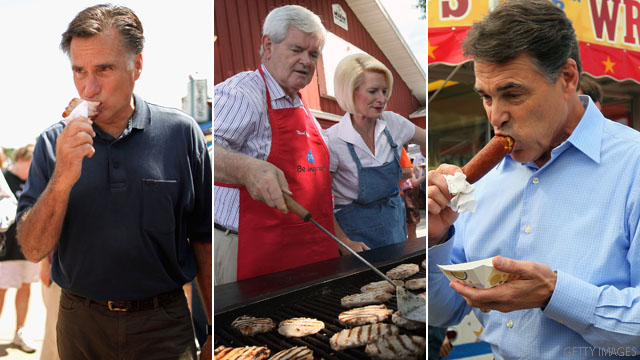 (CNN) – Some 2012 candidates give out pies. Others label their speech location "the best place in the country". All of them eat corn dogs and insist they're not regular politicians. The cheese is getting thick in the presidential campaign.

So this week in our American Sauce podcast we ask, "Can we take any of these politicians seriously?" Listen here. It's a good show.

To help candidates and voters alike, we've crafted our own sort of political sincerity test, assigning a point value to each campaign cliché, moment of hokiness and high-cheese factor. Comment below with what you'd add. Keep reading to look or take the test.

Politicians, concerned that your campaign has gone over the top? That you are more candidate than actual person? Take the test below and count the number of points you've racked up.

1 pt – Each day you use the same stump speech.
1 pt – Red tie or power jacket.
1 pt – Answering question by starting with "Look…"

5 pts – Holding a baby you just met.
5 pts – Ignoring children and speaking only to people of voting age.
5 pts – Speaking within kicking distance of a bale of hay.
5 pts – Mentions local sports team.
5 pts – Playing country music at one of your appearances.
5 pts – Wearing jeans. (Extra 10 points if wears jeans with a jacket/sports coat.)
5 pts – Taking a single bite out of dish of food and commenting immediately on how good it is.
5 pts – Eating fried food in front of cameras.

10 pts – Eating fried food in front of cameras at a fair.
10 pts – Giving away food as a prize.
10 pts – Posing with an animal.
10 pts – Story about a family member.
10 pts – Blaming the media.
10 pts – Saying your spouse is your better half. (This includes stories about a spouse initially turning you down for dates or a proposal.)
10 pts – Stressing you like the Grateful Dead, Bob Dylan, Stevie Wonder, Elvis or otherwise musically pandering to Baby Boomers.
10 pts – Bus tour.
10 pts – Mentioning your humble roots.

15 pts – Using the phrase "humble roots"
15 pts – Insisting you're not a politician if you have ever been elected to another office.
15 pts – Listing your regular church attendance as a campaign event.
15 pts – Incorrectly quoting an American founding father or founding document.
15 pts – Saying place you're at is the best place in the state, country or world at something.

20 pts – Taking off your jacket mid-sentence or mid-event.
20 pts – Playing any song at your event which the artist requests you stop playing.
20 pts – Not answering a question.

30 pts – Not answering a question but insisting that you have.

100-200 points: Cheesy and In Danger. You are at least highly cheesy and certainly are in danger of losing yourself to the campaign.

200+ points: Over The Top. You are a campaign addict and need to take a cold-turkey break from your consultants.

Want more on the staging, hype and dangers of the presidential campaign? Listen to our podcast here.   You can also listen to American Sauce on iTunes, Stitcher or subscribe to the podcast via RSS.