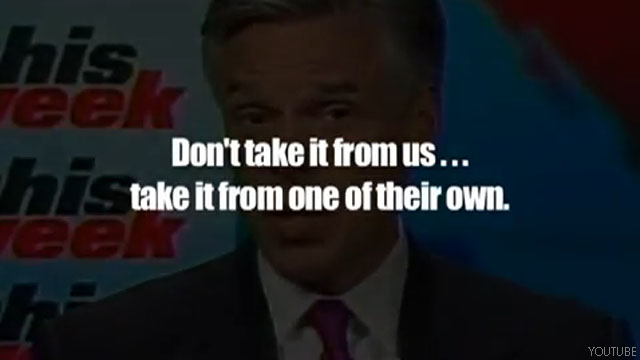 In web videos: Dems vs. Huntsman

The video from the DNC highlighted Huntsman’s criticism of his GOP rivals, including Mitt Romney and Rick Perry, prompting the committee to thank him for serving as their “surrogate.”

During an appearance on ABC’s “This Week” Sunday, the former U.S. ambassador to China criticized those in his party who are “too far to the right.” He specifically cited inconsistencies in the record of former Massachusetts Gov. Romney and past comments from Texas Gov. Perry.

“Jon Huntsman served as our best possible surrogate, reiterating what we already know about the Republican field of presidential candidates,” a DNC statement said. “In fact, we were so pleased with his message discipline that we decided to put out a web video titled, ‘Don’t Take It From Us.’”

The 30-second spot, which the DNC said could air on television in the future, is the latest in a string of attacks from the party’s fundraising arm capitalizing on Huntsman’s more moderate stances.

In their own video, Team Huntsman attempted to demonstrate his criticism of President Barack Obama, instead of his fellow Republicans.

The Huntsman spot pieced together segments of his ABC interview and an interview with CNN’s Piers Morgan, where he disparaged the president’s politics and handling of the economy.