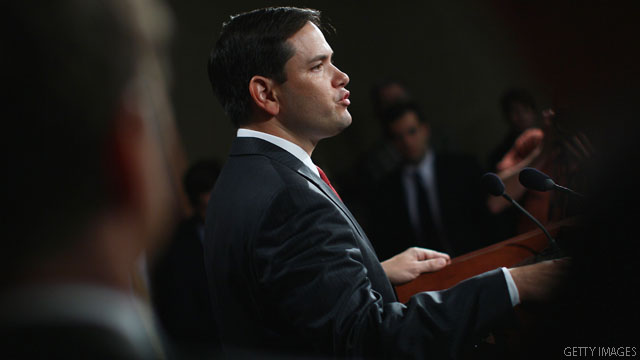 Rubio not running for VP, pivots spotlight to Reagan legacy

(CNN) - While national Republicans suggest Sen. Marco Rubio would be well suited as the GOP vice presidential candidate in the next election, the Florida freshman did his best to dispel the rumors Tuesday night, instead focusing his attention on his state and the American dream.

In a speech at the Ronald Reagan Presidential Library, his first major address out of Florida or Washington, D.C. since he was elected, Rubio said he has "no interest in serving as vice president."

"What happens in politics is the minute you start thinking there's something else out there for you, it starts affecting everything you do," Rubio said at the event in Simi Valley, California. "The reality of it is I'm not going to be the vice presidential nominee, but I look forward to working with whoever our nominee is."

Conservative writers and reporters have publicly lobbied for Rubio to run for president or serve in the No. 2 role in 2012, suggestions Rubio has repeatedly shot down.

Instead of concentrating on a national political run, Rubio said he is committed to making America prosperous and compassionate, principles he said Reagan understood.

With former first lady Nancy Reagan in attendance at the event, Rubio said his childhood was shaped by the Reagan presidency.

"He was elected when I was in 4th grade and he left, he left office when I was in high school," Rubio said. "Those are very important years … they were the years that formed so much of what today I know and believe to be true about the world and about our nation."

Rubio, who was elected in 2010 with backing from the tea party movement, said the current role of government "cannot be sustained," adding that a government provided safety net cannot be a way of life in the United States.

"If defining the proper role of government was one of the central issues of the Reagan era, it remains that now," Rubio said. "I know that it's popular in my party to blame the president, the current president but the truth is the only thing this president has done is accelerate policies that were already in place and were doomed to fail."