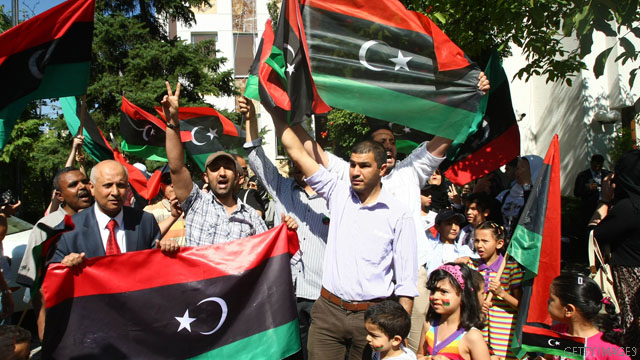 New CNN Poll: Support for Libya jumps but no bounce for president

Washington (CNN) - Support for U.S. military action in Libya has skyrocketed nearly 20 points in the wake of this week's events in Tripoli, but most Americans don't see the rebel advances in Libya as a victory for the United States, according to a new national survey.

And a CNN/ORC International Poll released Friday also indicates that while President Barack Obama's approval rating on Libya has grown, his overall job rating has not budged.

According to the poll, 54 percent of all Americans now favor U.S. military action in Libya, up from 35 percent in July. And a 52 percent majority now approve of how Obama has handled the situation in Libya, up seven points since May.

"Some of that sentiment is probably due to the fact that Americans don't view Gadhafi with the same contempt that they had for Saddam Hussein or Osama bin Laden - eight in ten felt that finding Saddam was a major achievement for the U.S. and two-thirds felt the same way about the death of bin Laden," says CNN Polling Director Keating Holland.

Some of it may also be due to the fact that the U.S. action was limited to air strikes. Historically, Americans appear to downplay air strikes without ground troops - the successful air strikes in Kosovo in 1999 were also not seen as a victory for the U.S. at the time.

"The pictures out of Tripoli were quite a bit different than those out of Iraq when Baghdad fell in the spring of 2003," adds Holland. "In Baghdad, American troops tied an American flag around a statue of Saddam and knocked it down with an American tank. American troops were nowhere to be seen in Tripoli this week, so it's not surprising that the U.S. public may have seen this as a victory for the Libyan rebels but not the U.S."

But the poll does indicate that a majority say that the world will view the U.S. as stronger after Libya.

Did the president get a bounce from Libya?

Apparently not. Libya has not changed the president's overall approval rating. Obama still gets low marks on the economy, and previous polling suggests that the number who think the economy is the number one issue is 12 times higher than the number who were principally concerned about Libya. As a result, Obama's overall approval rating now stands at 45 percent, with 54 percent saying they disapprove of the job he's doing in office, virtually unchanged since mid-July.

"Support for U.S. action in Libya grew in a bipartisan fashion. It's now 22 points higher among Democrats and 21 points higher among Republicans," notes Holland. "But the standard partisan gap remains on Obama's overall approval rating - Democrats are more than six times as likely as Republicans to approve of how Obama is handling his job overall."

The CNN/ORC International Poll was conducted August 24-25, with 1,017 national adults questioned by telephone. The survey's overall sampling error is plus or minus three percentage points.