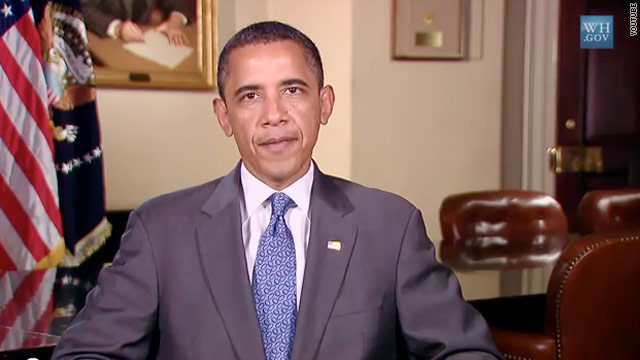 (CNN) – With the 10th anniversary of the September 11 attacks approaching, President Barack Obama said in his weekly address Saturday that serving others would be the best way Americans could honor those who lost their lives 10 years ago.

“Once again, 9/11 will be a National Day of Service and Remembrance. And in the days and weeks ahead, folks across the country - in all 50 states - will come together in their communities and neighborhoods to honor the victims of 9/11 and to reaffirm the strength of our nation with acts of service and charity.”

For the anniversary, Obama and his wife Michelle will attend ceremonies at all three 9/11 sites: ground zero in New York, the Pentagon, and Shanksville, Pennsylvania.

The president listed several planned service activities for 9/11, including volunteers who will help restore a community center in Minneapolis and others who will assemble care packages in Tallahassee, Florida, for troops overseas.

Obama said he and the first lady will join a local service project as well. To find a volunteer project, Obama encouraged Americans to visit the website Serve.gov.

“Even the smallest act of service, the simplest act of kindness, is a way to honor those we lost; a way to reclaim that spirit of unity that followed 9/11," he said.

Obama closed his address reminding listeners of the challenges still facing the nation, including the “worst economic crisis in our lifetimes” and the wars in Afghanistan and Iraq.

“None of this will be easy. And it can’t be the work of government alone,” Obama said. “As we saw after 9/11, the strength of America has always been the character and compassion of our people. So as we mark this solemn anniversary, let’s summon that spirit once more.”