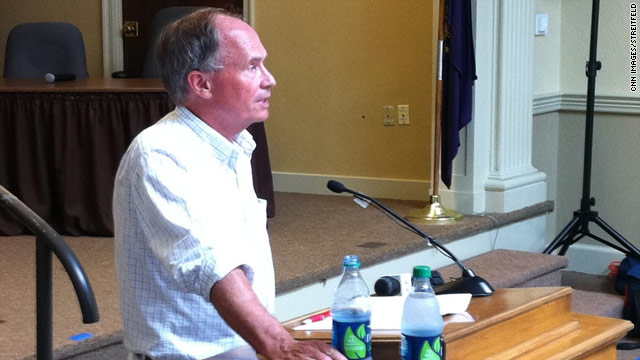 Nashua, New Hampshire (CNN) - Working-class anger bubbled over at a town hall hosted by Rep. Charlie Bass Saturday, when dozens of organized activists berated the Republican congressman for not helping the job market in his home state.

"During the ’90s we could afford to hire members of the community, but now we're barely able to pay ourselves," said Greg Goldberg, a furniture store manager who wore an Obama 2012 cap. "How much longer are we going to be able to do even that if companies continue to get tax breaks while continuing to send our jobs overseas?"

Many in the audience - including an organized group that traveled by van to the event - tried to turn the meeting into a rowdy debate as they scoffed at Bass' answers and applauded each other's hostile questions.

Bass stood at the podium with his sleeves rolled up and two bottles of water at hand, scribbling down questions on a sheet of paper as he called on even the most defiant questioners.

"To what degree did working-class Americans contribute to this crisis?" asked Tess George, a Democrat who said "Wall Street greed" and spending on foreign wars were to blame for the debt crisis.

Bass responded that Democrats should share the blame for the struggling economy, saying the president had several years to create jobs. He told the audience the Obama administration's stimulus initiative helped prove that spending would not pull the country out of its economic slump.

"We've got to create an environment in which businesses want and can employ people to do real jobs," Bass said. "And my ideas for that - I know you won't like, but they're the only hope, in my opinion that we have at this point - and that is to lower our corporate tax rate so it's competitive –"

He was cut off by shouts and groans in the audience. Bass then added Congress would work to make the tax code "simpler and fairer" in the fall.

Some of the outspoken opposition said they were members of the American Dream movement, a progressive group that advocates for middle-class workers.

At times, Bass would listen to a speaker's question and then say he had already answered with his thoughts. When one questioner became heated, Bass said: "Fair enough, that's your view, not mine."

He also pointed out that with 5.2% unemployment, New Hampshire is better off than many other states.

At one point a man asked Bass about his thoughts on General Electric, which pays little to no federal taxes and has become the target of liberal ire.

"In answer to your question, I don't believe that companies are people," Bass replied, drawing applause from the audience.

On the campaign trail, former Massachusetts Gov. Mitt Romney has attracted notice by saying "corporations are people too" in defense of low tax rates for businesses.

Not to be outdone, some conservatives in the audience attacked Bass for signing onto the deal to raise the debt ceiling.

One man called Bass' vote on the debt deal "gutless" because it didn't cut enough spending.

After an hour of questions, Bass thanked the group and said the back-and-forth gave him "renewed vigor and optimism" about the electorate.

"I welcome you to come and I appreciate the fact that you're here," he said.