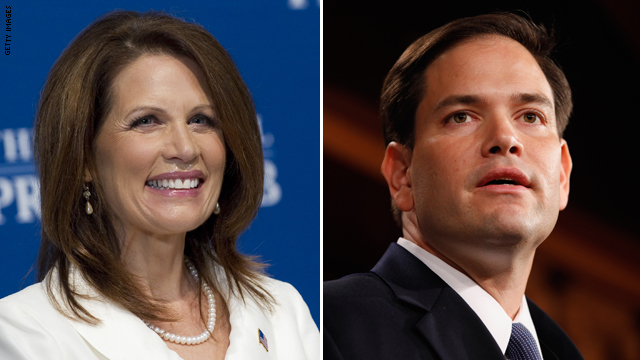 "I want to elect 13 more like-minded Republican senators, and I'm thinking on the order of a Marco Rubio," the Minnesota congresswoman said Monday at a campaign stop in Miami.

Click to watch video
She also brought up Sen. Jim DeMint of South Carolina as a model Republican senator.

But Bachmann's mention of Rubio, a freshman senator who's widely considered a rising star in the GOP, drew heavy applause from the Florida crowd.

Conservative writers and reporters have repeatedly floated Rubio's name as a possible running mate for the Republican presidential nominee, suggestions Rubio has consistently shot down.

When a reporter at the event asked Bachmann if she spoke to Rubio about possibly running as her No. 2, Bachmann declined to talk about her conversations with the senator.

"I've spoken with Marco Rubio. He is a wonderful man, and he has a wonderful reputation in Washington, D.C.," Bachmann said. "I don't disclose the private content of a conversation, but we've had wonderful conversations together before and I look forward to more with him."