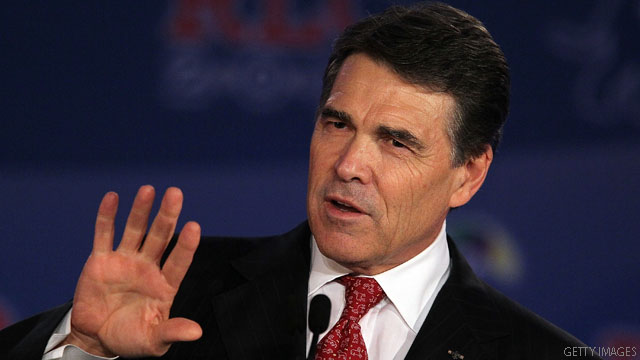 Speaking before the Veterans of Foreign Wars convention in San Antonio, Texas, Perry said the tenth anniversary of the Sept. 11 terrorist attacks should cue a renewed commitment against America's enemies, "wherever they are, before they strike at home."

However, he said American soldiers should only go to battle when "our vital interests are threatened."

"I do not believe America should fall subject to a foreign policy of military adventurism," Perry said. "We should always look to build coalitions among the nations to protect the mutual interests of freedom loving people."

"It's not our interest to go it alone," Perry added.

Perry, the son of a World War II veteran, was commissioned in the Air Force after college graduation, eventually leaving with the rank of captain having never served in active combat.

The longest serving Lone Star governor said America's allies should be involved in a decision to engage in military missions, but that ultimately that responsibility falls to the United States.

"We cannot concede the moral authority of our nation to multi-lateral debating societies," Perry said. "When our interests are threatened, American soldiers should be led by American commanders."

Perry used his remarks at the four day convention, where fellow Republican presidential candidate Mitt Romney will appear Tuesday, to announce a $3 million housing grant program for veterans in the state.

"Housing for heroes will help ensure veterans and their families have adequate housing as they ease back into civilian life and enjoy the blessings of liberty they earned with their valor and their sacrifice," Perry said.