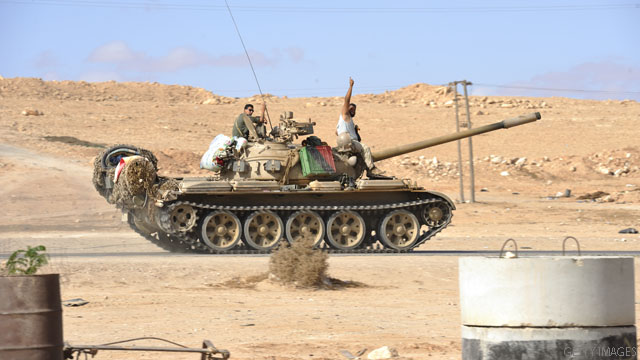 (CNN) - With ongoing fighting in Libya, Americans are worried about the future of the African country, worry that outweighs any positive emotions about recent events in the country, according to a new survey.

The CNN/ORC Poll released Tuesday showed two thirds of Americans predict Libya will now see widespread violence, similar to that in Iraq after the fall of Saddam Hussein in 2003. Three in ten believed that civil order will be restored in Libya.

Libyan rebel fighters made considerable advances during the last week, effectively ending longtime leader Moammar Gadhafi's rule, and eight in ten Americans are confident that he will be captured or killed. However, a majority do not think a stable democratic government will be established in the country and the public is split over whether terrorists will eventually use it as a base of operations.

As a result, six in ten said they are worried about what lies ahead in Libya, far more than the 50 percent who are relieved and 47 percent who are pleased about recent events in the country.

Overall, Americans do not want the U.S. playing a major role in Libya's future with three quarters opposed to U.S. financial aid to the country and two-thirds saying the U.S. should stay out of their attempts to restore civil order and establish a new government.

The poll surveyed 1,017 adults by telephone between Aug. 24 and Aug. 25 with a sampling error of plus or minus three percentage points.