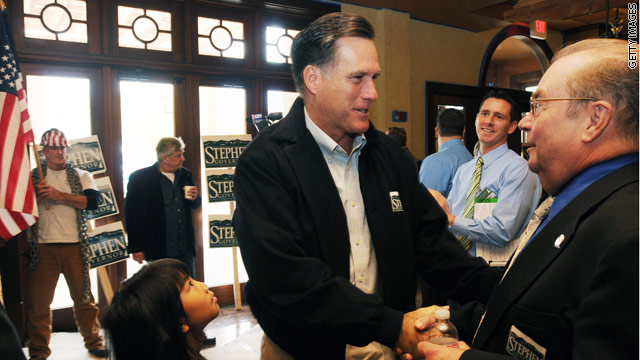 (CNN) - Republican presidential candidate Mitt Romney used a speech to veterans Tuesday to chastise President Barack Obama's handling of the military and contrast his leadership style with that of the current commander in chief.

The former Massachusetts Gov. said the U.S. cannot be a leader on the world stage by expecting more from its enemies. American strength, he said, is the "only guarantee of liberty."

"With freedom as our cause, strength is our only sure defense," Romney said before the Veterans of Foreign Wars convention in San Antonio, Texas.

Romney said defense cuts proposed by the White House assume two mistaken beliefs – that the world is becoming a safer place and that America should become a "lesser power."

"It flows from the conviction that if we are weak, tyrants will choose to be weak as well; that if we could just talk more, engage more, pass more U.N. resolutions, that peace will break out," Romney said. "That may be what they think in that Harvard faculty lounge, but it's not what they know on the battlefield."

He pointed specifically to U.S. involvement in Libya, where he said the mission lacked clarity, an oft-repeated Romney refrain from the campaign trail.

"When a president sends our men and women into harm's way, he must first explain their mission, define its success, plan for their victorious exit, provide them with the best weapons and armor in the world and properly care for them when they come home," Romney said. "Anything less is not befitting a great nation."

Rival presidential candidate and Texas Gov. Rick Perry spoke to the same group Monday and also advocated for the support of servicemen and servicewomen.

But Romney used his business past as evidence he can properly chart the future of the United States, which would include slicing billions from the defense budget.

"Let me tell you, as a conservative businessman who has spent most of his life in the private sector, I look at that kind of inefficiency and bloat and say, 'Let me at it,'" Romney said.