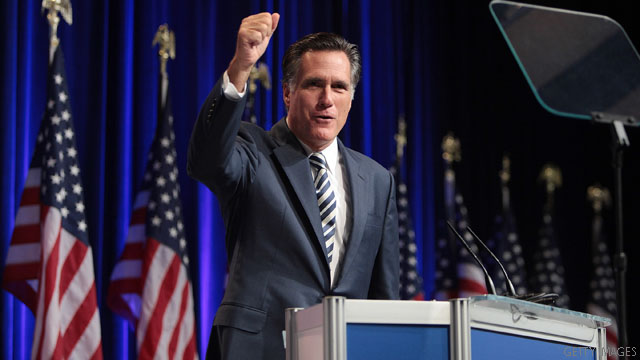 The group's fifth national bus tour kicked off last week in California and will end in Tampa ahead of the CNN/Tea Party Express debate on September 12th. Thirty stops are on the bus tour's schedule.

Romney's appearance at the event is significant: he has not headlined any events in the Tea Party Express' previous four bus tours. Meanwhile, leaders of other tea party groups say they cannot recall any major tea party events that Romney has spoken to or attended since the movement began in 2009.

When contacted by CNN, Romney's campaign did not dispute that assertion, though a spokesman did stress that Romney has frequently met with tea party activists and supports their ideals of limited government, less spending and lower taxes.

"The more access [tea party activists] have to these candidates to make an informed decision, the better chance that candidate has to win their support," Russell said.

In the weekend surrounding the traditional deadline for filing taxes - this year extended to April 18 - conservative activists rallied as they have in the past two years on "Tax Day." Bachmann, Cain, former Minnesota Gov. Tim Pawlenty and some other presidential contenders supported the protests by attending tea party rallies in person.

The former Massachusetts governor did, however, meet with tax filers around that time, his campaign told CNN. But that was not affiliated with the "Tax Day" protests.

"He was in Orlando. It was an H&R Block location. He had an event where he met with people who were filing their taxes and talked about the need to reform our tax code and to reduce taxes," said Romney spokesman Ryan Williams.

Also, on April 14, the Orlando Sentinel published an opinion piece from Romney in which he appeared to make overtures to the tea party.

"Almost two and a half centuries after the original Boston Tea Party of 1773, the idea of limited government that inspired our forebears is very much alive," Romney wrote.

Romney, only considering a presidential bid at the time, continued: "Thanks to the Tea Party, there's real hope that we can rein in our profligate federal government."

Speaking to the editorial board for New Hampshire's Foster's Daily Democrat, Romney said: "The tea party isn't a diversion from mainstream Republican thought."

"It is within mainstream Republican thought," Romney added. "And I want to appeal to the tea party voters. I don't know what folks here in New Hampshire would say, but my guess is most tea partiers, or a lot of them, would support my candidacy." He cited his experience in the private sector and fiscal conservatism.

And yet, Romney's relationship with the movement can be described as complicated, at best.

In a fresh CNN/ORC International poll, Romney lands in third-place among tea party supporters, suggesting he's not their favorite. In the survey, Perry gets 37-percent support from those conservative activists, Bachmann, 14-percent, and Romney 11-percent.

"I don't recall anything," she said. "Now that doesn't mean that he hasn't done something. But I don't recall him being at any tea party events."

Romney's spokesman was emphatic about the candidate's ties to activists and their causes.

"Gov. Romney has met with tea party activists across the country and was very active in the 2010 election cycle to help elect tea party minded candidates to both state and federal office," Williams said.

"Gov. Romney supports the principles of lower taxes, less spending and limited government that are supported by members of the tea party and by Republicans across the country. He intends to campaign on his pro-jobs message and focus on his efforts to reduce spending, limit government, and decrease taxes," Williams added.

Yet tea party leaders are unsure.

"I would say that there's not a lot of enthusiasm for him versus the other candidates," Martin said, also explaining that: "He definitely has taken positions that are contrary to what most tea party people consider important. I would even say he is in trouble with the tea party base – more because people are cautious about him and much more enthusiastic abut the some of the other candidates."

Martin cited tea party anger at the health care law passed in Massachusetts during Romney's term as governor. "'Obamacare' was modeled after 'Romneycare,'" she said.

Upon hearing that Romney would headline the upcoming Tea Party Express event on Labor Day, Steinhauser responded: "I would say it's probably smart politically to do that. It's a little Johnny-come-lately. But it shows we have influence. It'll be interesting to see how he's received or how people react."