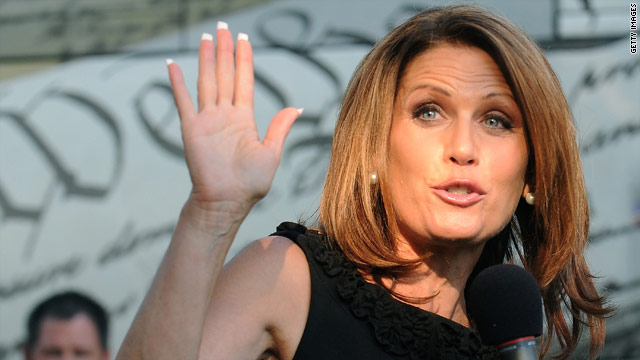 Out of the gate, she lashed into President Barack Obama’s request to Congress to schedule a jobs speech next Wednesday.

“We had an interesting little dialogue today with our president,” the Minnesota congresswoman said at the beginning of her remarks. “He decided he wanted to give his jobs speech at the exact same time the Republican candidates for president were going to be doing their debate at the Reagan library.

“Does this show maybe a little insecurity on the part of the president?” Bachmann asked.

The candidate spoke at the Des Moines stop on the Tea Party Express’ fifth national tour. The rally’s sparse attendance was unusual for a tea party rally - especially one attended by a presidential candidate as popular with activists as Bachmann.

Though there was no firm way to count the exact number in the audience, it was certainly not in the thousands or hundreds – and very likely was under 100.

What was not sparse was Bachmann’s steady slams against the president and the audience’s willingness to feast on the rhetorical red meat.

Ripe for ridicule: The president’s jobs speech request. Obama initially hoped to deliver it on September 7 - a Wednesday - to a joint session of Congress. On that same night, Republican presidential candidates will debate at the Reagan Library in California.

After Bachmann's rally appearance, news emerged that Obama will instead deliver the jobs address on Thursday.

Meanwhile, Bachmann lit into another of the president’s proposals. The congresswoman criticized Obama’s nomination of Alan Krueger to be the new chairman of the White House Council of Economic Advisers.

“He chose someone from Harvard with a Ph.D., and someone who works in the Treasury Department and the Department of Labor and now is teaching at Princeton,” Bachmann said. “There is no private-sector experience in their background. They have not created wealth. They have not run a business.

“Wouldn’t you think, after all this time, that the president would figure out that it would make more sense to hire someone who's at least run a lemonade stand to be his economic advisor?”

What Bachmann did not mention is that many economists have praised Krueger’s nomination. Among them: Former assistant Treasury secretary Michael Barr.

Krueger is the "leading labor economist of his generation," Barr said.