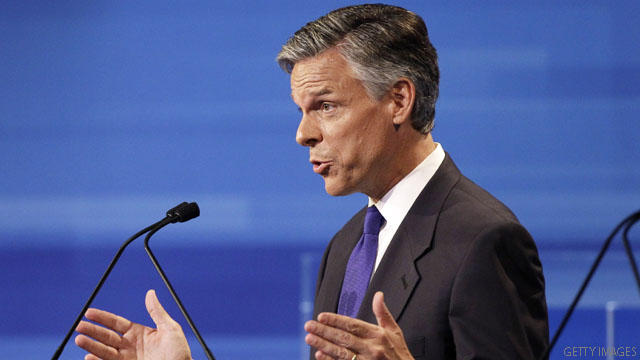 Manchester, New Hampshire (CNN) – Presidential candidate Jon Huntsman will portray himself as the responsible fiscal conservative running for the White House as he announces a jobs plan that includes restructuring the tax-code to remove all loopholes, deductions and tax expenditures and eliminating the home mortgage deduction, in a speech Wednesday, according to a campaign official.

The plan – which the former governor of Utah will release a week before former Massachusetts Gov. Mitt Romney and President Barack Obama announce their jobs plans – is called "Time to Compete" and focuses on four areas: tax reform, regulatory reform, energy independence and free trade.

"Meeting our challenges will require serious solutions, but above all, it will require serious leadership – a quality in high demand in our nation's capital, and among my opponents on the campaign trail," Huntsman plans to say in remarks at Gilchrist Metal Fabricating in Hudson, New Hampshire.

Huntsman would eliminate capital gains, dividends taxes, and the Alternative Minimum Tax, and reduce the corporate tax rate to 25 percent. His plan calls for three individual tax brackets set at eight, 14 and 23 percent. The changes to the tax code would be revenue-neutral.

In his speech Huntsman will fault the president for his role in the debt ceiling negotiations, and will continue attacking his GOP opponents for failing to support the eventual deal. Huntsman was the only candidate to support the deal.

He will tell an audience at the metal fabricating plant "it's time for America to compete again. I believe with a new administration we can do just that."

"The President believes that we can tax and spend and regulate our way to prosperity. We cannot. We must compete our way to prosperity," Huntsman plans to say. "We need American entrepreneurs not only thinking of products like the iPhone or Segway; we need American workers building those products. It's time for made in America to mean something again."