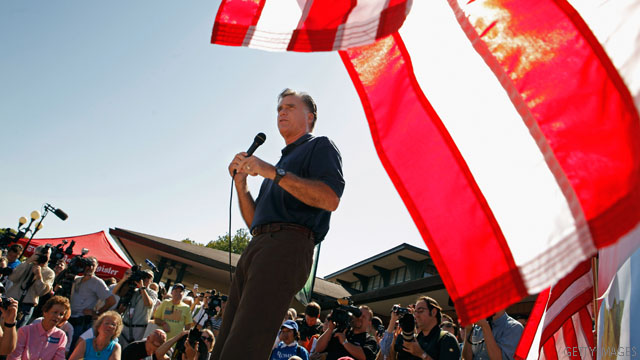 The group accused the Republican presidential candidate of suddenly "pandering" to conservative activists "because he's getting challenged from [Minnesota Rep. Michele] Bachmann and [Texas Gov. Rick] Perry and even [Texas Rep.] Ron Paul."

FreedomWorks' actions at the Tea Party Express rally in Concord could spark some unusual infighting amongst conservatives. The result may be some Republicans lining up against Romney on the campaign trail and some tea partiers publicly opposing other tea partiers.

A Romney spokesman did not respond to the harsh claims against Romney or the protest promise when questioned.

But on Monday, after CNN reported that Romney would headline his first major tea party event, spokesman Ryan Williams said: "Gov. Romney has met with tea party activists across the country and was very active in the 2010 election cycle to help elect tea party minded candidates to both state and federal office."

Williams continued: "Gov. Romney supports the principles of lower taxes, less spending and limited government that are supported by members of the tea party and by Republicans across the country. He intends to campaign on his pro-jobs message and focus on his efforts to reduce spending, limit government, and decrease taxes."

Romney's joining the Tea Party Express on its nationwide bus tour is a key sticking point.

Initially the former Massachusetts governor was confirmed to speak at an Express rally on Monday in Manchester. But the campaign switched course on that decision. Instead, Romney's campaign now says the candidate will speak at the Express' Sunday rally in Concord. The campaign also announced that Romney would attend a conservative gathering in South Carolina on Monday, an invitation he at first had declined.

"The whole staff learned once we read the article that [CNN] posted...That's when it got out to [FreedomWorks president and CEO Matt Kibbe] and everybody," Steinhauser said. "We had a discussion on our staff about it. And Matt was pretty adamant that this is just something that we've got to distance ourselves from."

In a statement, the Express responded to the protest plans.

Russell added: "It's just silly to protest a tea party where Governor Romney is speaking. …Narrow mindedness is not the way to strengthen the tea party movement."

"We view this move by FreedomWorks at best as a misguided press stunt, and are disappointed at the disingenuous approach taken after we have made every effort to be inclusive and accommodating on our national bus tour," Russell wrote.

"We've said all along that Mitt Romney's positions on key economic issues – particularly on health care and cap and trade – are anathema to the core issues that animate the tea party movement," Kibbe told CNN. "And we felt like we needed to speak up early and often in hopes of finding a more acceptable candidate in the Republican primary."

Meanwhile, Steinhauser explained the specific opposition to Romney being given a slot to speak at the Express rally.

"Because it provides cover to him as a tea party candidate, which he's not," Steinhauser said.

Steinhauser then made claims about Romney's motives.

Kibbe signed on to that line of thinking, saying: "I think it looks like political opportunism, certainly."