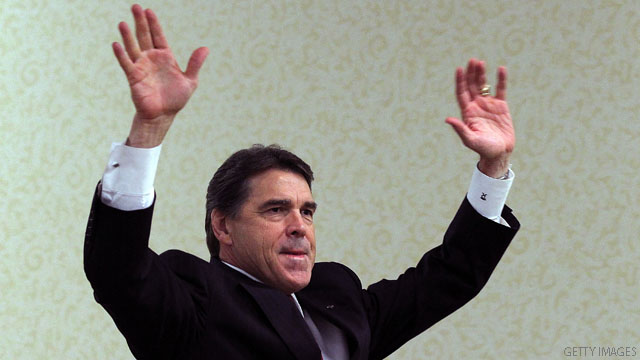 Rick Perry leads in another poll

Romney, Bachmann and Paul are declared presidential candidates, while Palin is still considering a run for the White House.

When Palin was taken out of the survey field, Perry led Romney 26 percent to 20 percent, with Bachmann at 12 percent.

Perry also received the top spot in a CNN/ORC Poll released Monday with 27 percent, ahead of Romney's 14 percent and Palin's ten percent. Bachmann and former New York City Mayor Rudy Giuliani, who has not decided whether to launch a bid, received nine percent.

The two polls follow other national surveys that show Perry at the top of the GOP field.

Quinnipiac University surveyed 1,185 Republican voters between Aug. 16 and Aug. 27 with a sampling error of plus or minus 2.9 percentage points.