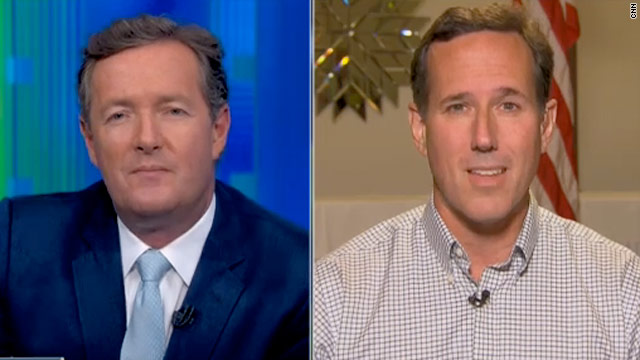 (CNN) – Presidential candidate Rick Santorum defended his position on gay marriage Tuesday while speaking to students at Pennsylvania State University, and slammed CNN's Piers Morgan for questioning him as a "bigot" in a pre-taped interview that aired Wednesday night.

In the interview, Morgan pressed the former Pennsylvania senator on his moral beliefs about gay rights, an issue he's repeatedly spoken about on the campaign trail.

Santorum said he subscribes to the Catholic Church's teachings, which deem homosexuality a sin.

Morgan argued that people have a difficult time coming out because "of the level of bigotry that's out there against them."

"And I have to say that your views you've espoused on this issue are bordering on bigotry, aren't they?" Morgan asked, adding that society has evolved in how it views homosexuality.

Santorum countered that the Church's position is founded on more than 2,000 years of history. To adapt those beliefs based on the changing ways of society, he said, would be immoral.

Santorum then lobbed a charge of bigotry back at Morgan.

"Trying to redefine something that is seen as wrong – from the standpoint of a church – and saying a church is bigoted because it holds that opinion that is biblically based, I think that is, in itself, an act of bigotry," Santorum said.

When talking about the other candidates, Santorum, who's previously labeled his campaign "the little engine that could," referred to his GOP opponents as "shiny engines" that are bound to simply come and go.

"We've seen every one of these folks who have shot to the top of the ratings end up coming back down to earth once they have to get in front of the cameras at the debate," Santorum said.

The former senator has been struggling to break into the top tier of the Republican race.

Santorum has especially lashed out against Perry, whom he implied might cower under the scrutiny of a national campaign. In recent weeks, Perry has emerged to front-runner status, appealing to both fiscal and social conservatives–while Santorum continues to assert he is the only true social conservative in the race.

The social conservative highlighted his 12 years as a U.S. senator, arguing that he understands the kind of pressure that a national figure goes through on a campaign.

"There are lots of shiny engines that come out of the round house and go by," Santorum said. "And they're going to get that kind of treatment and inspection that candidates get."