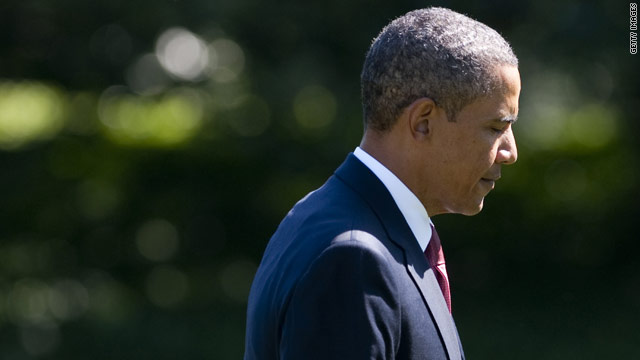 New CNN Poll: 65% give Obama thumbs down on economy

Washington (CNN) - Only a third of all Americans approve of how President Barack Obama is handling the economy, according to a new national survey.

And with a CNN/ORC International Poll also indicating that more than three-quarters of the public say the country is in bad shape right now, there's little wonder why the president is getting such low marks.

According to the poll, released Wednesday morning, 28 percent of people questioned say things are going well in the country today.

"That may be a slight uptick from early August but it still represents a double-digit drop from earlier this year," says CNN Polling Director Keating Holland. "And it's clear that economic jitters are a drag on President Obama's standing with the voting public."

Obama gets good marks for his handling of international issues. Six in ten approve of his handling of terrorism and roughly half like his track record on foreign affairs in general and Libya in particular.
And 53 percent say they trust Obama as the nation's commander-in-chief.

"Two-thirds of Democrats continue to approve of Obama's economic record, but seven out of ten independents disapprove. Not surprisingly, more than nine out of ten Republicans also disapprove of how Obama is handling the economy,” adds Holland.

The CNN/ORC International Poll was conducted August 24-25, with 1,017 adult Americans questioned by telephone. The survey's overall sampling error is plus or minus three percentage points.