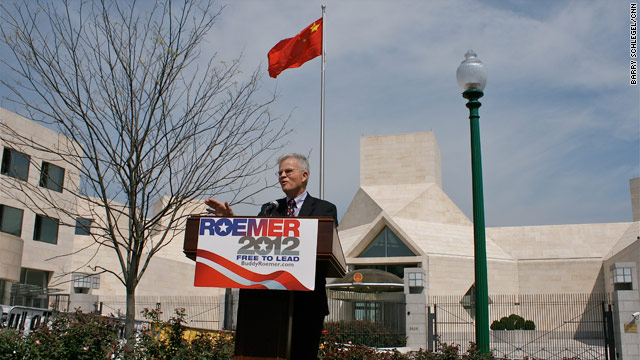 The former Louisiana governor slammed American politicians and economists for encouraging businesses to move overseas, particularly China, along with their jobs and factories.

"We've become the biggest fools in the world," Roemer said. "Adopting global free trade while other countries impose trade barriers against our products."

But after World War II, Roemer said America changed its policies for the worst.

Proponents of free trade argue that it lowers prices of goods and provides economic growth for developing countries.

"There are no jobs. Our jobs are in China," Roemer said. "Is he going to retrain Americans to speak Mandarin?"

But while Roemer praised America's former protective tariff policies, he said he would not support the same practices today, as he claims to not be a "tariff guy."

He, instead, laid out a plan involving tax deductions for companies that employ and buy American workers and products. He also proposed the elimination of foreign tax credits, preventing American corporations from receiving tax breaks for paying taxes in other countries.

"We need a president to get the bear out of the room," Roemer said.

The Chinese Embassy did not respond to requests for comment. Roemer's campaign was granted a permit for the location by the U.S. State Department.

Roemer announced his run for the presidency on July 21. With low name recognition and little money-he only accepts contributions of $100 or less and no PAC money-Roemer has struggled to break into the more competitive pool of GOP candidates.

With his focus on New Hampshire, Roemer is living in the Granite State and said he's seeing a boost in fundraising. Last week, his campaign raised more than $35,600, or as he called it, enough money to pay for a ticket to an Obama fundraiser.

"America desperately needs a crotchety old man like me, who has clear vision of the facts and the wisdom to notice that there's a reason that there's no room to sit safely."

"But I've yet to see what his actions were in that. I'd be interested to know what battles he lost," Roemer said. "What more did he try to do and failed to get done?"

Before his tenure as governor, Roemer served four terms as a congressman in the 80s. After leaving public office, Roemer worked as the CEO of Business First Bank.

And while he's experienced, Roemer said that in a world where timing is everything, his political service may have been too long ago.

"My problem is that I'm just not known," Roemer said. "And it's easy to put me aside."