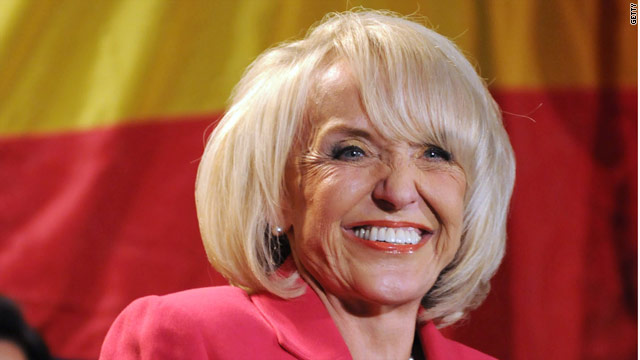 Saturday is the deadline for Brewer to decide whether to move Arizona's 2012 primary up to January 31 in an effort to give her state greater influence in the GOP presidential race. The primary is currently slated for Feb. 28.

But Brewer's move would not only violate Republican National Committee rules that forbid any state other than Iowa, New Hampshire, Nevada and South Carolina from holding a primary or caucus before March 6, it would also compel those first four states to move up their own contests to protect their cherished early state status.

Brewer has not showed her hand but said she is keeping all options on the table.

Iowa's GOP chairman Matthew Strawn has already promised to move the caucuses from February 6 into January if another state jumps the line, and New Hampshire Secretary of State Bill Gardner has unilateral power to set his state's primary date, currently Feb. 14.

South Carolina is also planning to have its primary in January instead of February 28 if Arizona decides to move up.

Chad Connelly, South Carolina's GOP Chairman, is also saying that he is working on a deal with Florida to move up their primaries "in tandem."

The move would theoretically give Florida Republicans cover to hold the fifth nominating contest, after South Carolina, even though Florida is not an RNC-sanctioned early state and Gov. Rick Scott has not settled on a final date for their primary.

Connelly told CNN that he hopes the agreement – which Florida Republicans deny is in the works - "ends the drama" and keeps other states from trying to "mess the calendar up."

Along with Florida and Arizona, Georgia, Minnesota, Missouri and Michigan are also considering shaking up the calendar and holding early primaries or caucuses.

But Connelly said Florida, which is currently scheduled to vote on Jan. 31, should go fifth. Other states should wait their turn, he said.

Florida GOP spokesman Brian Hughes said there is no effort underway to move their date in tandem with South Carolina.

He said that under Florida law, a nine-person commission has until Oct. 1 to recommend a primary date to the governor. That commission has yet to meet.

"Speculation about some sort of deal about a date in Florida with any other state is not possible," Hughes told CNN. "Until that occurs there is no way that anybody in Florida can talk about a specific date."