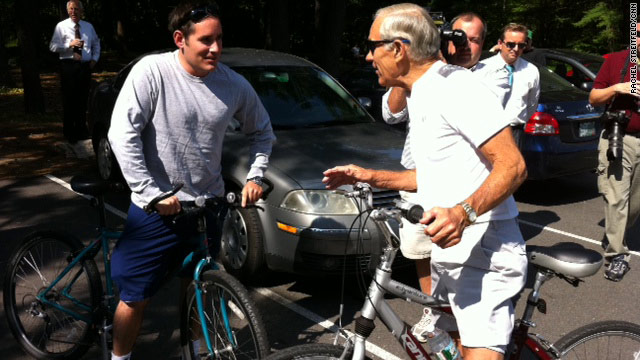 Lake Massabesic, New Hampshire (CNN) - Politicians often seek to portray youthful vigor, but at age 76 Congressman Ron Paul may have to work harder than others.

He showed Friday he's up to the challenge.

Paul, who famously rides his bicycle for exercise throughout the sticky, sweltering summers in Houston, Texas, invited some New Hampshire staffers and reporters on an hour-long bike ride around scenic Lake Massabesic outside Manchester, New Hampshire Friday afternoon.

The sun was shining, a breeze was blowing, and the temperature in the North Eastern state was a temperate 72 degrees.

"It looks like the temperature's about perfect," Paul said, when a reporter asked if he missed the Houston humidity, though he noted summer workouts weren't all bad. "I think when you ride in all the heat and humidity you burn calories faster."

The wiry fiscal iconoclast tries to walk three or four miles in the morning and ride ten to 15 miles on his bicycle in the evenings. He reported his resting heart rate was 58 to 62 beats per minute and his blood pressure was 120 over 70 or 65.

Before kicking off, Paul spoke to a small group of reporters who were not dressed for riding. The long-time congressman, who hosted a town hall in the first-in-the-nation primary state Thursday night and has spent time retail politicking here, said he welcomed the visit of former Alaska Gov. Sarah Palin on Labor Day.

"The more the merrier," he said. "They just divide up all the opposition. They don't take votes from me."

He said he was surprised and encouraged by the groundswell of support for his campaign in New Hampshire.

"Each time I come up here we get new people, new support," Paul said. "The crowds get bigger. We always plan to have a little gathering, get 50 people together, and sometimes we get hundreds of people together."

After the ride, Paul careened back into the parking lot without having broken a sweat. He joked that during the hour ride he'd covered 32 miles (it was actually about 7.4).

Asked by the media if the ride might serve a metaphor for his campaign, Paul happily obliged.

"We're in good shape and ready and raring to go," he said.