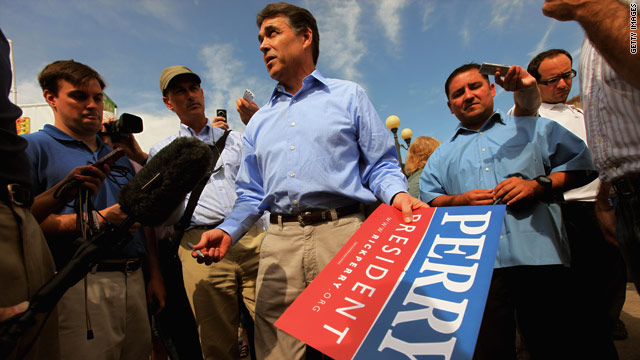 Reading from notes, the folksy leader launched a blistering assault on the president for failing to turn around the country's fiscal struggles, and offered his record in Texas as his recipe for success.

"It's time for a change," he told a group of largely undecided Republican voters in Manchester, New Hampshire. "And I'm not talking about the rhetoric of change, I'm talking about a record of change."

Perry said he had created jobs in Texas, while the president had expanded the role of the federal government without creating long-term jobs, and had taken the country in the wrong direction, he said.

He also had some advice for the president as he prepares to announce a jobs plan next week.

"If the president wants to make a good jobs speech, he needs to stand up in front of the American people and say we're going to repeal 'Obamacare,' " Perry told an audience in Chichester, to thunderous applause.

Perry - who pledged to do away with Obama's health care plan on his first day in office - did appear to take a veiled swipe at GOP competitor Mitt Romney.

"As we consider the economic misery that's spread across this country by the Obama administration, we don't need a nominee who's going to blur the differences between themselves and President Obama," Perry said. "We're going to have a nominee who draws a clear contrast."

The former Massachusetts governor's health care plan was used as a model for the national plan, a fact Perry has sought to underline in recent appearances.

At the house party in Chichester, Perry spoke emotionally about service members fighting in foreign wars. He said the country should spend more money caring for its veterans. On the subject of the wars in Iraq and Afghanistan, Perry said there should be a "national conversation" over the next year before the election, but said he did not favor setting timetables for withdrawal.

Perry was asked at each crowded event about preventing illegal immigration, and said it was the federal government's responsibility to aid in border protection by sending National Guard troops.

Gerald Easson, of Farmington, said he was impressed by the governor's candor.

"Talk is cheap. I'm going by facts. What they've accomplished, what they can do," he said. "Everything he's tackled, he's accomplished it."

State Rep. Al Baldasaro, who has yet to endorse a candidate, had a similar response.

"He looks you in the eye and he tells you how it is," Baldasaro said. "He's not looking over my shoulder. He's talking to me when I ask him a question."

Baldasaro said he asked for more information about Perry's record on caring for veterans in Texas to help him make a decision about supporting the governor.

Members of the media were kept a few feet away from Perry by his security detail at both events, and the governor did not take questions from the press.