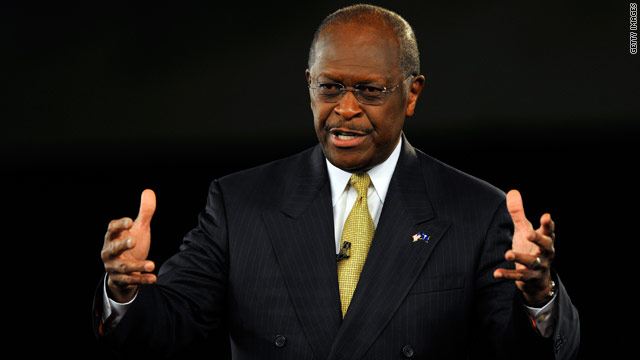 (CNN) - On the eve of rival Mitt Romney's speech announcing his own jobs plan, Republican presidential hopeful Herman Cain laid out his own plan for turning the sagging economy around.

Asked by DeMint what he would do about the country's massive debt, Cain responded that "we must boost economic growth," adding that GDP growth of five or six percent would be a target to strive for. Then, citing his own experience from the business world, Cain said he favors an across-the-board cut to federal spending of, perhaps, ten percent. Cain would follow that up with a "deep dive" into the budget of each federal agency "to eliminate that programs that are, in fact, duplicative [and] outdated - based upon performance metrics – and eliminate a lot of those programs." Third, Cain said the federal government needs to "get serious" about restructuring the big entitlement programs like Social Security. On that score, Cain said he favors personal retirement accounts and pointed to the changes Chile made in its retirement savings program.

Cain told DeMint that he favors a legal requirement of balancing the federal budget. "I believe in a balanced budget amendment [to the Constitution]. Yes, because otherwise, we're not going to have the discipline in Washington in terms of collectively of getting that."

And Cain took a moment to blast the inside-the-Beltway thinking of some on Capitol Hill. "The idea in Washington, D.C. ...is if you reduce the growth, that's a cut. That's not a cut. That's deceiving the American people," Cain explained as both DeMint and Rep. Steve King, R-Iowa, listened.

Cain also told DeMint he would try to rein in the Federal Reserve Bank by asking Congress to limit the Fed's authority.

And echoing rival Rep. Ron Paul, R-Texas, Cain said Monday that "We have got to get back to sound money."

Asked by DeMint whether he favored a return to a gold standard for U.S. currency to achieve that, Cain said, "Yes, we do need a gold standard to do that. We can work our way back to a standard – that's the only way we're going to make our currency, the currency that people around the world depend upon. So, yes, I do support establishing standards and there are many ways to do it in addition to a gold standard."