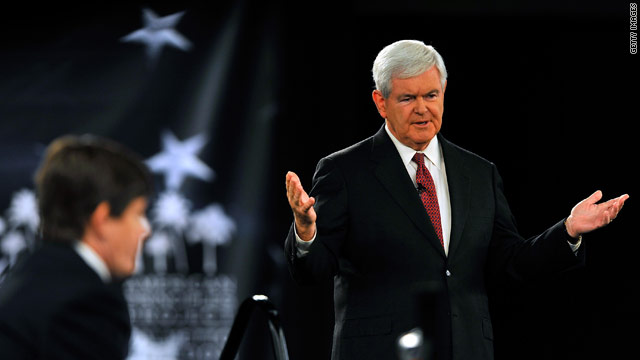 "The gap between the America the founding fathers created and the system currently down in Washington is extraordinary," he said. "We are in great danger of decaying from citizenship to being subjects … this is a system rum amok."

Gingrich warned that the country – namely the economy - is in "grave danger" and could get worse if Obama remains in office.

When asked what his solution would be, Gingrich listed off several items, including repealing the Wall Street Reform bill, changing the Environmental Protection Agency, improving the Food and Drug Administration, keeping taxes the same in 2013, having zero capital gains taxes and the implementation of an American energy plan.

When asked by Rep. Steve King, R-Iowa, what would be his number one priority as president, Gingrich said to laughs, "the King bill to repeal Obamacare." King jokingly shot back, "no further questions."

As for the role of the courts, Gingrich, a life-long historian, did not hold back.

On the subject of the definition of marriage, Gingrich said there should be a constitutional amendment stating that marriage is between a man and a woman.

"I do believe we have every right to defend a 3,000 year clear record. That's what marriage is. And I don't think we should be intimidated."