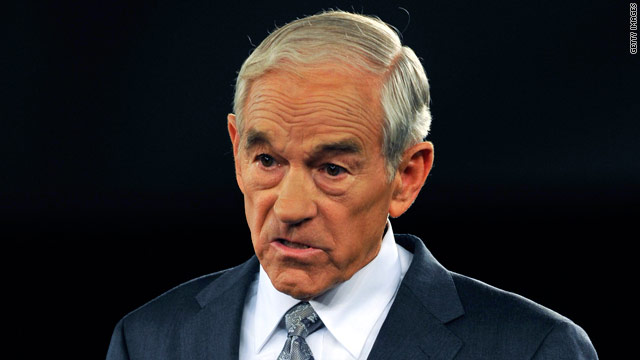 (CNN) – Republican presidential candidate Rep. Ron Paul, R-Texas, hit on many of the regular themes of his candidacy during his appearance Monday at the Palmetto Freedom Forum.

The event featured five GOP presidential contenders taking questions individually from a panel comprised of GOP Sen. Jim DeMint of South Carolina, GOP Rep. Steve King of Iowa, and Professor Robert George of the American Principles Project. Before the questioning, each candidate was given the opportunity to speak about the country's founding principles.

"I understand that we're supposed to address the subject of first principles," Paul told the audience, "I've been trying to do that for about 35 to 40 years. I welcome the opportunity to talk about first principles because that is what America's all about. And the first principle for American should be liberty and I think we've forgotten about that."

From there, Paul used his appearance to hit on the major policies that define his 2012 White House bid.

Questioned by DeMint about the number of responsibilities the federal government currently has and what Paul would eliminate or downsize if elected to the Oval Office, the Texas Republican responded "Well, that's a difficult question because that's a long list. I'd rather you give me the list of the things we should keep. That would be a short list."

Paul reiterated his belief that the Federal Reserve plays a crucial role in the business cycle and in the boom-to-bust cycles that have defined the American economy over the decades. "It has to be reined in," Paul said of the central bank. "We have to take the Fed on because it does cause the business cycle. If you want to understand recessions and depressions, you have to understand the Federal Reserve System."

Asked what his jobs plan would be, Paul responded, "Well, what you have to do is repeal about 70 years of bad economic policy." The outspoken lawmaker followed up with a critique of Keynesian economic theory.

Paul added that he would encourage the repatriation of capital that has gone overseas because the U.S. dollar is both weak and is the reserve currency for the rest of the world. He also said he'd eliminate the capital gains tax and the federal income tax.

And Paul linked U.S. monetary and fiscal policy with U.S. foreign policy. "All great nations fail because they spread themselves too widely around the world and we've done it as well," he told DeMint.

Paul also said Monday that he supports the idea of a balanced budget amendment to the Constitution. And Paul engaged in a spirited debate with George about the meanings of the Fourteenth and Tenth Amendment – specifically, whether the federal government could utilize the Fourteenth Amendment to compel states to protect life, liberty, and process in accordance with due process of law.