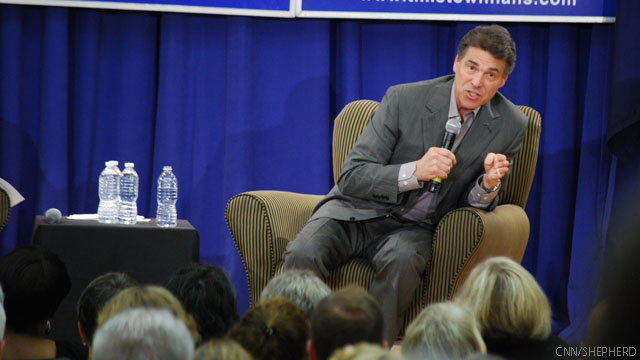 Conway, South Carolina (CNN) – Texas Gov. Rick Perry may have canceled his appearance before Sen. Jim DeMint's presidential forum Monday, but earlier at a town hall he didn't miss the opportunity to take a swipe at his primary opponents.

"There is no one gonna be sitting on that stage who has a record of job creation that I have," Perry said, referring to the Sept. 7 debate in California, the first time the nascent presidential candidate will participate in a debate with his opponents.

"There's gonna be some that got up, that get up and say, 'Well I've created jobs,' and that's true. There's one in particular that created jobs all over the world. But while he was governor of Massachusetts, he didn't create very many jobs," he said.

Perry spoke to a town hall in Conway before cutting his trip short to return to Texas to deal with wildfires in the state.

The three-term governor has been criticized for taking credit for the jobs created in his state over his 10-year tenure as governor, but he attributed the rise to the efforts of the Texas people.