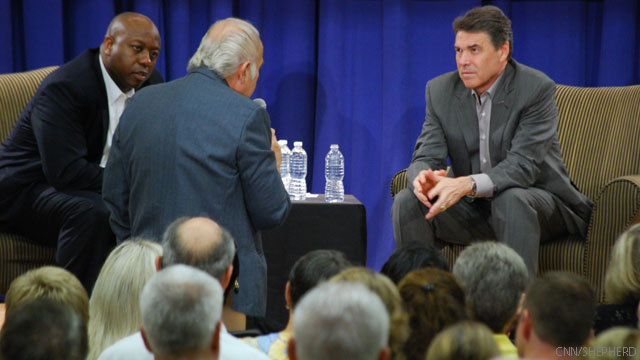 Perry picks up support in S.C. from '08 Romney backer

State Rep. Alan Clemmons met with Perry after he wrapped up a town hall in his coastal district.

"I'm certainly not taking anything away from Mitt Romney. He's a great man," Clemmons said in a CNN interview. "I just feel that today, Rick Perry has everything that it's going to take in order to return the White House to common sense, to where the Republican people want it to be.

Clemmons, the sole Mormon in the South Carolina state legislature, said he met with Perry in March and encouraged the Texas governor to run for president but he didn't reach his decision to endorse until over the weekend.

The real estate attorney said he served on Romney's 2008 state finance committee and as county co-chair for the White House hopeful, who came in fourth in South Carolina's primary and went on to lose the Republican nomination to Arizona Sen. John McCain.

He said his decision came down to experience between the two governors.

"That kind of experience, when compared to job creation compared to when Gov. Romney was governor of Massachusetts, it certainly puts a big spotlight on Gov. Perry's abilities to put government in its place so that small business and business in general in America can do well and flourish," Clemmons said.

Perry was expected to join five other White House contenders at DeMint's forum in Columbia, but he canceled his appearance so he could return to Texas to deal with wildfires there.