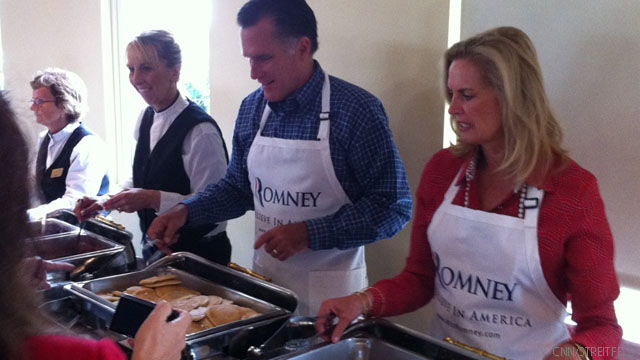 The former Massachusetts governor and his wife served 1,500 pancakes to a large crowd of 450 attendees at the Derryfield Country Club in Manchester, according to campaign estimates.

Click to watch video
The line to receive pancakes wrapped in a circle around the room, and the Romneys - wearing campaign aprons - served guests for almost an hour.

"I sure hope they put some big beams underneath this balcony," Romney joked to guests as he addressed them later as the sun rose on the scenic golf course behind him.

Romney pointed out several state lawmakers in the crowd and singled out Manchester's mayor Ted Gatsas, who has not yet endorsed a candidate for 2012.

After his speech, Romney was asked about beliefs he shares with the tea party.

"The tea party is a powerful movement saying government's too big, and I couldn't agree more," he said.

Romney said Republicans would unite around their party's candidate to defeat President Obama in 2012.

Eight Republican GOP hopefuls, including Romney, will come together at a CNN/Tea Party Republican debate on Sept. 12 cosponsored by CNN, the Tea Party Express and tea party organizations representing every state in the nation.