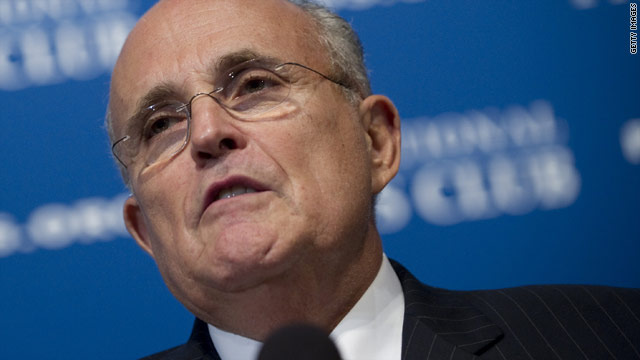 (CNN) – Former New York City Mayor Rudy Giuliani, who's been mulling a White House bid all summer, said he would have a hard time winning the Republican nomination if he decided to run. But it's an idea he still hasn't ruled out.

"It would be difficult for me to be nominated," Giuliani said at the National Press Club on Tuesday. "We'd have to be truly desperate."

Click to watch video
Giuliani was a favored contender early on in the 2008 presidential race, only to drop out in January after disappointing results in the first few primaries.

"The mistake I made last time was getting too focused on the idea of the national campaign," Giuliani said.

Offering advice to two of the 2012 GOP frontrunners, Texas Gov. Rick Perry and former Massachusetts Gov. Mitt Romney, Giuliani warned against worrying too much about national polls, which he said "don't mean anything."

The real prize rests in winning the early primaries-two of which, he said, lean favorably toward conservative Republicans.

"And I'm simply not that conservative on social issues, and I'm not willing to change just to become president," Giuliani said.

The former mayor said he's still waiting for a clear leader to emerge in the race before he throws his weight behind a candidate.

"If I think we're truly desperate, then I may run, which is how I got elected mayor of New York City. You know what my slogan was? 'You can't do any worse'," Giuliani said to a laughing audience.

Giuliani endorsed Perry in the governor's 2010 run for re-election in Texas against Republican Sen. Kay Bailey Hutchison. When asked if he'd support Perry again, Giuliani said he wasn't ready to make a decision.

"I think his record in Texas is exactly the kind of record we need in the United States," Giuliani said, but added none of the candidates have clearly emerged as the best-chance winner against President Barack Obama next year.

Since entering the race in mid-August, Perry has frequently taken credit for strong job growth in Texas during his decade-long tenure in the governor's mansion.

On the same day two major national polls showed Obama with declining approval numbers, Giuliani said he thinks if the election were held today, either of the top two Republicans in the race would win.

But there's also another guy Giuliani wouldn't mind seeing in the Oval Office.

"For the last couple of years, having been a critic of [Bill] Clinton, I've been saying, 'I want you back'," Giuliani said, while laughing.

"This has been really a disaster," he added, referring to Obama's administration.